Welcome to Part 3 in our Best Of the Trans-Americas Journey 2013 series of posts. Part 3 is all about the Best Hotels from the past year of travel on the road including an epic shower in Bogota, a riverside room with missing walls in Colombia, an amazing adventure resort in Panama, a houseboat hotel and more. Part 1 covers the Best Adventures & Activities of 2013 and Part 2 covers the Best Food & Beverages of the year.

For the seventh year in a row we were on the road full time and nearly every night of the year was spent in a hotel of some sort. Here, in no particular order, are our picks for… 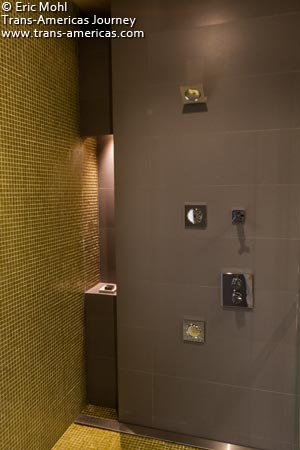 The epic shower at the B.O.G. Hotel in Bogota, Colombia.

Best shower: B.O.G. Hotel is one of the few fine boutique hotels in Bogotá, Colombia. There are many boutique-y touches including a polished design inspired by the city’s amazing Gold Museum. Our favorite touch? The shower. This thing had three adjustable shower heads, gold tiles, fabulous Calima amenities made just for the hotel, plenty of pressure and heat, and a glassed-in design that turned the thing into your own private sauna. The only thing missing was a seat or bench. Then again, we’d probably still be in that shower had there been a place to sit down… 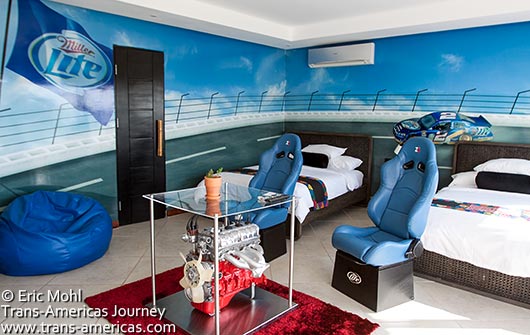 Best adventure resort: You may know Travis Pastrana as the stunt man/motocross/X-Games/Red Bull-sponsored extreme sports icon. We know him as the guy who got our butts up on wakeboards then gave us a swish bed and private Jacuzzi to recover in. In 2012 Travis, and a bunch of his amped-up friends, opened Nitro City Panama Action Sports Resort near Panama City. With world class wakeboarding, kiteboarding, and BMXing facilities, champion instructors, and a luxury hotel Nitro is a unique concept in adventure resorts. Nitro City Panama is the first in what the gang hopes will be a global revolution in the way thrill-and-skill-seeking travelers play and stay. Check out their Miller Lite theme room, below. 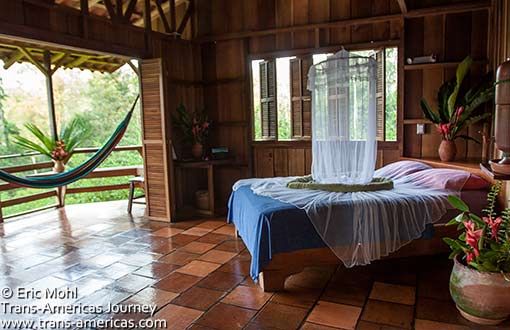 A room at Selva Bananito Eco Lodge in Costa Rica.

Best eco hotel: One of the very last hotels we stayed at in Costa Rica ended up being the greenest. Selva Bananito Eco Lodge & Preserve scored points right from the start when the dedicated owner pointed out a rarely seen potoo bird just off the deck of our bungalow. Toss in some of the most serious eco and sustainable practices in all of Costa Rica, the absolute best adventure horse back riding trip in Central America (check it out on our list of Best Adventures and Activities of 2013) and you’ve got a great stay that’s doing great good. 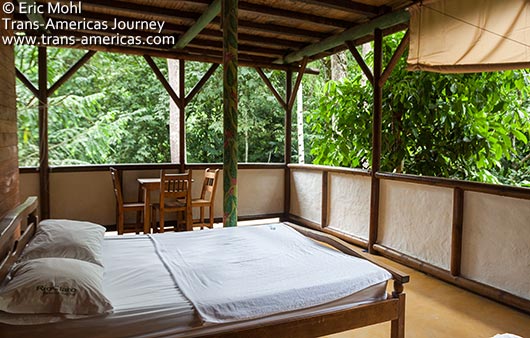 Our room with missing walls at El Refugio in Colombia.

Best room with (intentionally) missing walls: It’s sensible. If you’ve built riverside rooms in one of the most spectacular canyons in Colombia why not take out an entire wall in order to maximize the view? It’s risky as well. What about bugs? And bats? We can’t explain it, but when we spent a night in the partially open rooms at El Refugio along the Rio Claro there were no bats and remarkably few bugs in our room. All the missing wall let in was that spectacular view and the sound of the rushing Rio Claro river below. 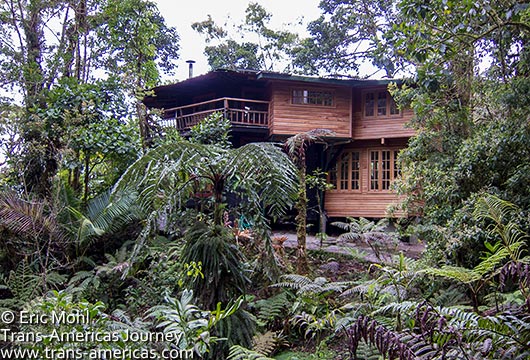 One of the wonderful cloud forest cabins at Los Quetzales Ecolodge & Spa in Panama.

Best cabins in the cloud forest: Los Quetzales Ecolodge & Spa, in the town of Guadalupe near Cerro Punta in the cool hills of Panama, has a secret. About 10 minutes up a rough dirt road beyond the main lodge and rooms are a handful of spacious wooden cabins tucked in the cloud forest (one is pictured below). They each have multiple bedrooms, WiFi, full kitchens and fireplaces (at over 7,260 feet/2,200 meters it gets chilly). They’re the perfect family or romantic hideaway. Bring your own groceries or arrange for the chef from the main lodge to come cook for you. Los Questzales Ecoldge & Spa also gets the award for best hotel spa of 2013. It ain’t fancy but you can get a superb deep tissue massage for 1.5 hours for US$45 in an open air spa room with the sound of a creek gurgling by. 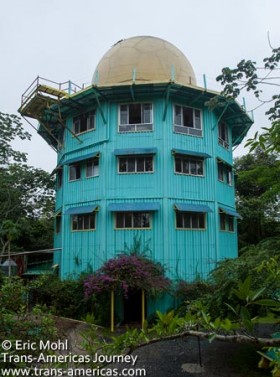 Canopy Tower is a magnet for bird watchers in Panama.

Best for bird watchers: Canopy Tower, just outside Panama City, used to be a US military radar station watching over the former Canal Zone hence the tall, circular design. After the US abandoned it, the tower was converted into a lodge with large windows and patios which provide nature lovers (including Martha Stewart) with 360 degrees of jungle watching. Birds and monkeys can be seen from almost every spot in Canopy Tower, including the showers. If that’s not enough for you, their guided bird watching tours are also excellent. 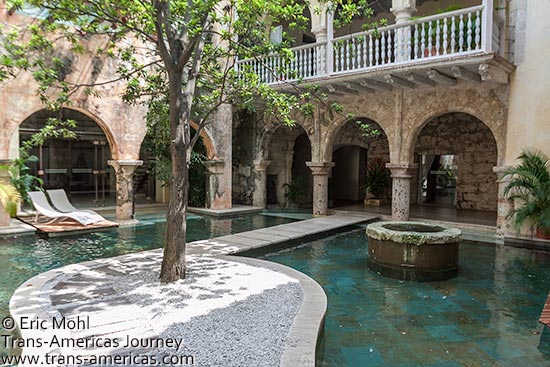 Best hotelier slash city guide: Claude Pimont would be fascinating even if he didn’t own and manage two noteworthy hotels in Cartagena, Colombia (Casa Pestagua and Casa Pombo). He’s a relaxed but elegant Frenchman who has made his home in Colombia where, in addition to running hotels, he has established an acting career. He is also one of the most enthusiastic and connected proponents of Cartagena and our time in the city was greatly enhanced by his guidance, recommendations, introductions and lively company and conversation. 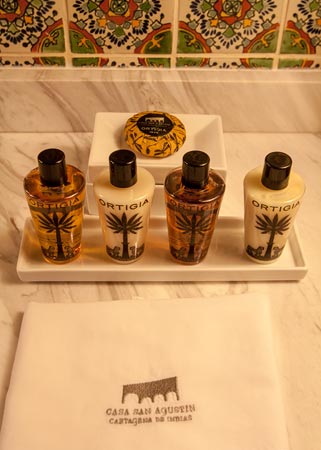 The best amenities of the year at the best boutique hotel of the year.

Best bathroom amenities: There can be no doubt that freshly-opened Hotel Casa San Agustin has raised the bar for all boutique hotels in Cartagena, Colombia. There are many things to love about this place, from the pool under the remains of an ancient aqueduct to the suites with private patios and plunge pools, but it was the little details that we loved most, including the Ortigia shampoo, conditioner, lotion and bath/shower gel. Straight from Italy, these amenities were indulgent, large (nearly four oz./120 ml) and pleasantly masculine. We have to admit, we pocketed more than a few and we break them out whenever we want to be reminded of the best boutique hotel experience of the year. 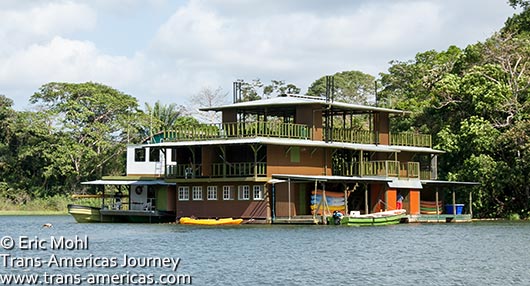 The Jungle Land Panama Lodge near the Panama Canal.

Best houseboat hotel: There is only one houseboat hotel in Panama and it’s a doozy. Located in a secluded section of Lake Gatun, which forms the central portion of the Panama Canal, Jungle Land Panama Lodge is the creation of Captain Carl. He’s connected two houseboats, crafted a handful of simple but comfortable rooms and leads boat and kayak tours on the lake. You can go fishing, look for monkeys and crocs or just relax in the hammocks or on the two astro-turfed “lawns” onboard.

Best value city hotel: We arrived in Cartagena, Colombia after a five-day crossing via sailboat from Panama and we were facing at least of week of red tape in front of us as we navigated our way through the process of getting our truck out of customs after its journey by container ship from Panama. We needed a comfortable and affordable base to operate from. After an uncharacteristic misstep (don’t check into a hostel in Cartagena called The Roof), we were tipped off about Hotel Villa Colonial in the Getsemani neighborhood of Cartagena. Villa Colonial does not have dorm rooms but its prices for private rooms (doubles or  triples) is the same as or even cheaper than area hostels and there’s a kitchen for guest use. Martha greeted us as we arrived and her “Glenda the Good Witch” personality and optimism got us through the next week of paperwork as much as our clean and comfortable A/C room did.

Best alterna-hotel: We tried our first vacation rental in 2013 and it combined the best of a hotel and the best of a home. FlipKey set us up in a chic, fully appointed apartment in the historic center of Quito, Ecuador. We used it as a base for exploring the world’s first UNESCO World Heritage site city before returning “home” to cook, relax, and work in peace.