You know us. We’ll pretty much drive anywhere, anytime, for any reason. But we seriously debated whether or not to go all the way up to Yellowknife in Canada’s Northwest Territories. 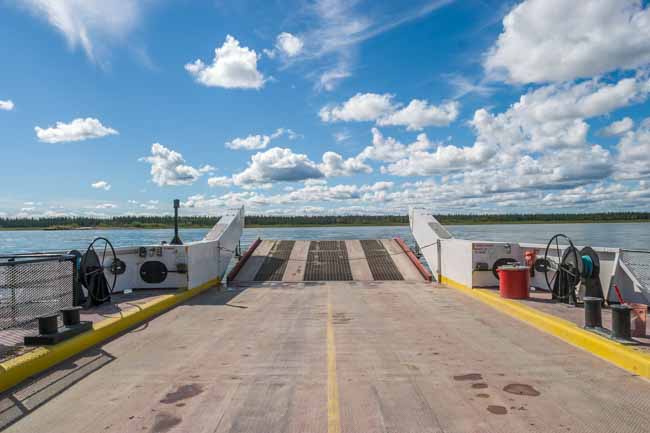 On the free ferry across the Mackenzie River on our way to Yellowknife.

After crossing the Mackenzie River on a ferry we were bombarded by a series of roadside signs warning us that buffalo are frequently seen in the area. As if on cue, we saw one within five minutes of disembarking from the ferry. The poor thing was being absolutely tormented by flies that created Pigpen-like clouds around its impossibly huge head. These same flies, by the way, swarmed our Silverado anytime we dipped below five miles per hour. We were afraid to get out. 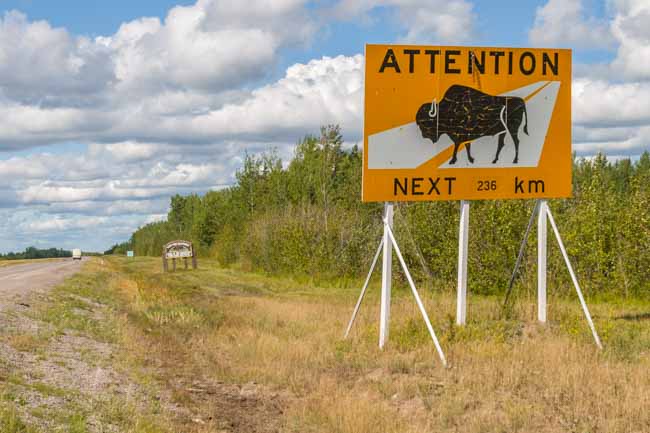 This buffalo could have been from the nearby Mackenzie Wood Bison Sanctuary which has been so successful at breeding the once-endangered Wood Buffalo that they now wander around freely in pretty big numbers. They’ve also, sadly, interbred with their American Buffalo cousins, creating a kind of half-breed that nobody seemed too excited about. 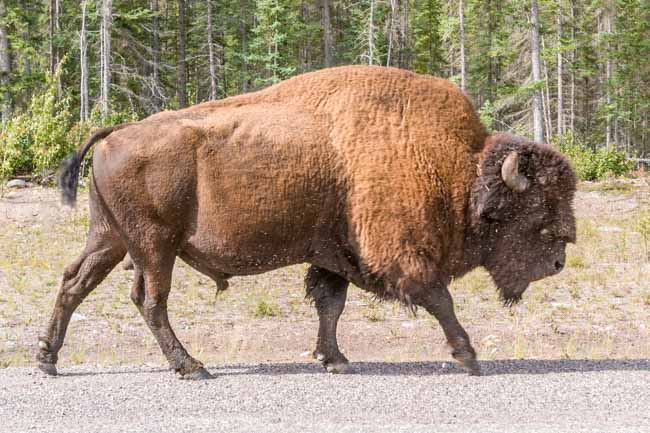 Buffalo like these, probably a cross between Wood Buffalo and American Buffalo, were everywhere along the long road to Yellowknife.

The further north we drove on Highway 3 (there are only nine highways in all of the vast Northwest Territories), the more buffalo we saw—over a dozen before the day is through—along with a surprising number of hitchhikers. Where have they come from and where are they going out here so far from anything that even resembles a starting or ending point? 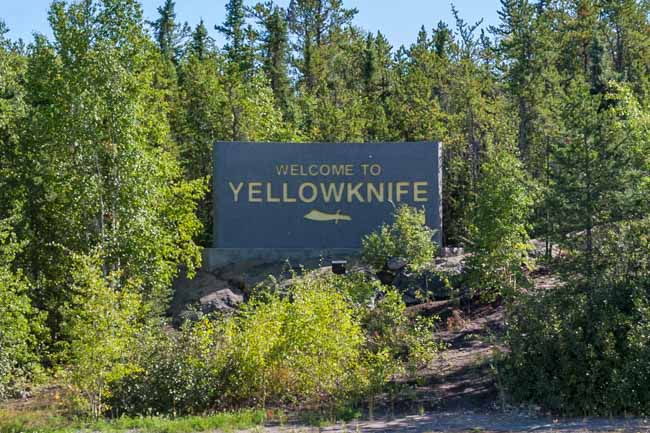 Welcome to Yellowknife, the capital of the Northwest Territories and one of the most remote cities we’ve ever been to.

We eventually reached a town and as we passed the dusty turn off for Rae Edzo, the scrubby, watery Tim-Burtonesque boreal forest we’d been driving through for so many days suddenly petered out and was replaced by huge slabs of rock and the exposed flanks of half-buried boulders dragged, scraped clean, and left there by glaciers. This terrain is dramatically called the Canadian Shield and it continued all the way up into Yellowknife, which was built on such deep and stubborn bedrock that construction workers have to jackhammer holes into the solid rock then slip dynamite inside to blow away enough of the stuff to build a foundation. 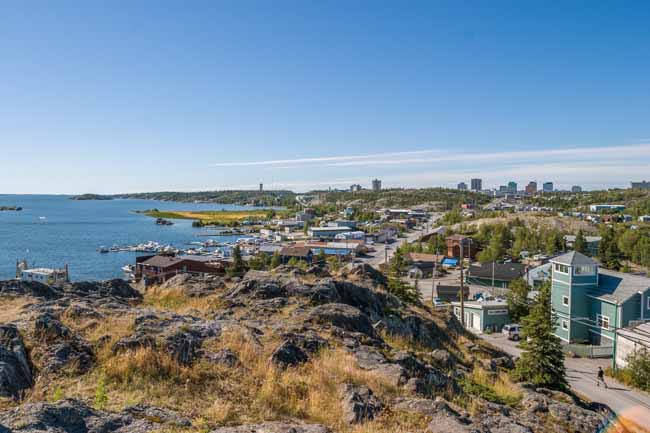 A view of the bustling metropolis of Yellowknife.

Our first glimpse of the Yellowknife skyline (yes, skyline) confirmed that we’d made the right decision. Yellowknife was a surprise already! But before we checked out the town itself we took advantage of the hours of daylight still at our disposal and headed out to the very end of the line where Highway 4 (aka, the Ingraham Trail) headed out of town only to dead end with little more than a redundant stop sign to mark the end of the road. 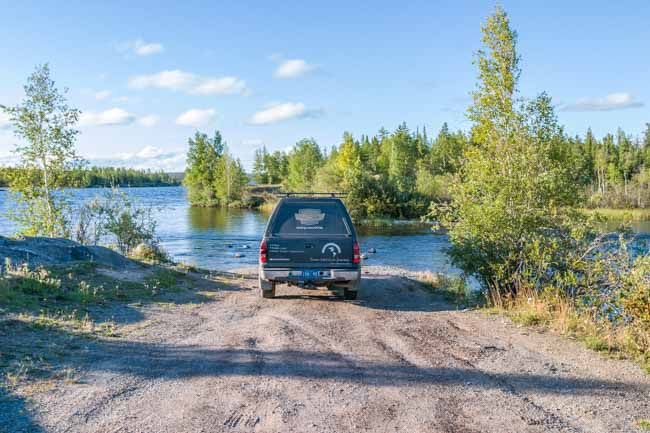 The Ingraham Trail (aka Highway 4) dead ends 44 miles (70 km) beyond Yellowknife, at least until winter when the freeze creates an ice roat that extends this highway.

Back in Yellowknife, we checked into City Lodge B&B run by Bryan and Miki. Here we witnessed our very first Aurora Borealis, though we would have missed the whole thing if Miki hadn’t knocked on our door and told us to look outside. Bless her.

We were stunned as the famous Northern Lights swirled across the sky in slow motion like a day-glo etch-a-sketch. We stood in the middle of the sidewalk with our necks craned staring up at the sky while non-plussed locals were forced to navigate around us. Dorky, yes. But everyone’s a little awkward their first time. 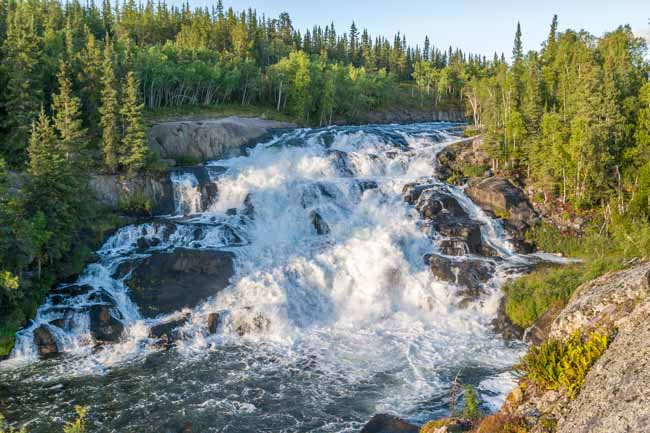 Cameron Falls in Hidden Lake Territorial Park along the Ingraham Trail near Yellowknife.

This was far from a strong Aurora, so we hopped into our Silverado and high tailed it back out the Ingraham Highway hoping to increase the drama in the sky by escaping the lights of Yellowknife. But even out in uninhabited wilderness there was still too much natural twilight left in the sky, even at 1 am.

We were so far north that people pointed their ubiquitous satellite dishes not up toward the stars, but out toward the horizon since that’s the level at which satellites circle up here. You’d get yourself a satellite dish too if you lived in Yellowknife since movies are $12 a ticket (this makes us immediately stop whining about the $10.50 Manhattanites routinely pay). A beer will cost ya $6.50. A bad beer. In a bar with a little too much character, if you know what we mean. And everything else you care to mention is pretty expensive too, except for fish. We bought a whole freshly caught pink salmon for less than $5 at the local supermarket. 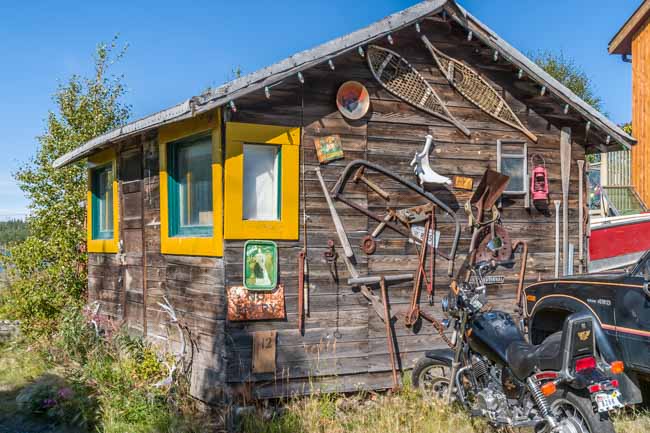 A cabin in Yellowknife.

Yellowknifers also have the world’s coolest license plates since every car in the Northwest Territories is issued a stark white plate cut into the shape of a polar bear. Rumor has it that neighboring Yukon Territories, not to be outdone, is contemplating a cut-out, all-black, raven-shaped license plate but, if you ask us, there’s no way that big black bird will ever be cooler than that big white bear. 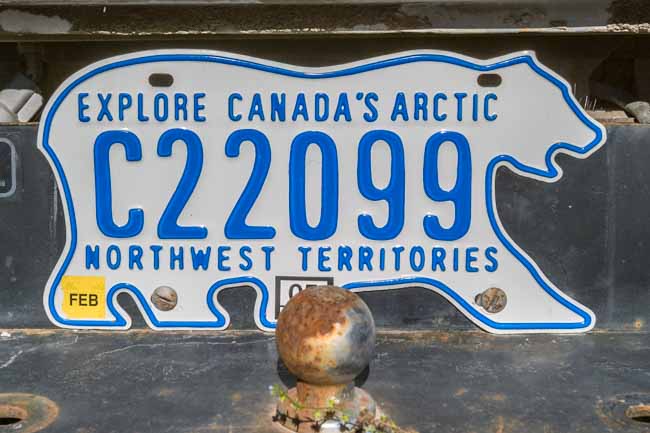 The Northwest Territories have our favorite license plate.