Our very first notes about our very first impressions of Banff National Park read: “Breathtaking. Truly a mountain paradise.” After days of hiking, glacier touring, wildlife spotting, and hot spring soaking we stand by every word. 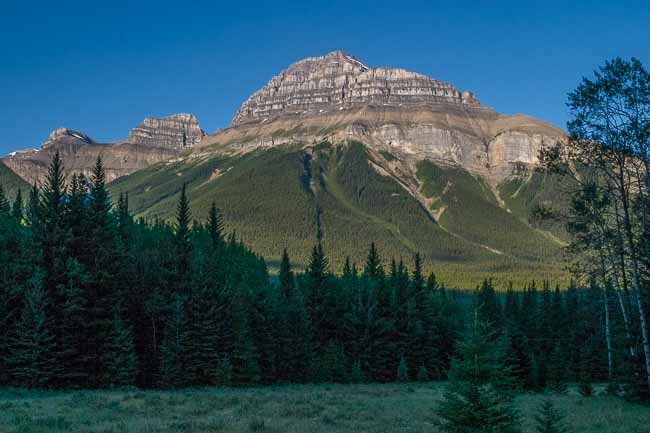 Along the Bow River Parkway in Banff National Park.

We almost didn’t make it to Banff National Park at all. Useful as they are, GPS devices are not without their quirks. For example, if you tell your GPS to find you a route, but select the “avoid toll roads” command, it will likely take you the long way around Park entrances, which it registers as toll points since you generally have to pay to get in. That’s how we ended up on a dirt logging road outside Canmore, British Columbia on a painfully slow back route into Banff National Park. So we turned the GPS off, opened up the map, headed back to the highway and finally arrived at this park which is part of a group of Canadian parks that was designated a UNESCO World Heritage site in 1984. 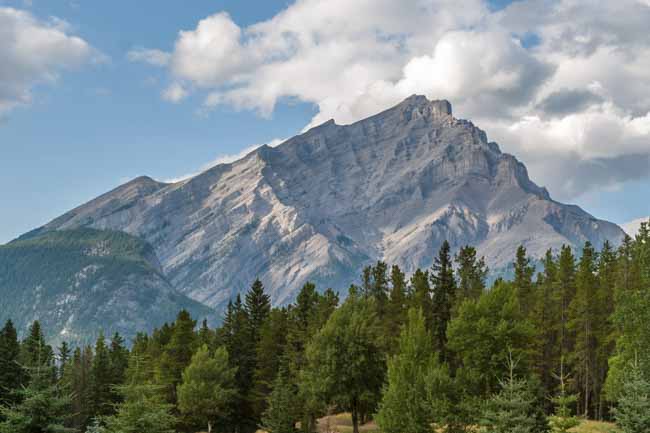 Mount Rundle above the town of Banff, Canada. 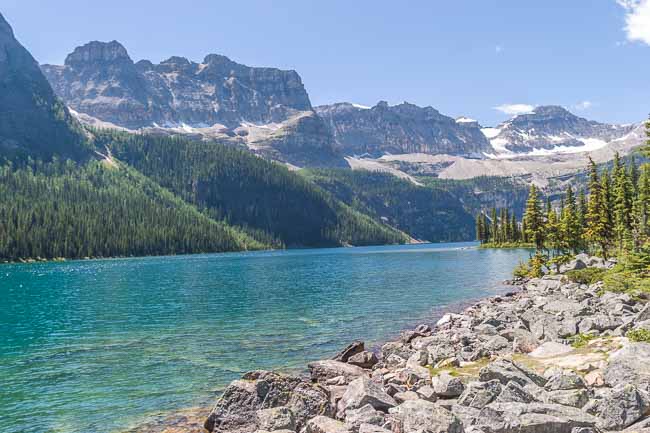 At Lake Louise we were rewarded with bright sunshine which lasted for the entire hike up to the Plain of Six Glaciers and back. There were definitely sections of trail that were steeper than expected, but at the top there is an absolutely adorable tea hut where you can get sandwiches, cakes and, of course, tea. And the amazing amphitheater of glaciers (the aforementioned Plain of Six Glaciers) is just a bit beyond. 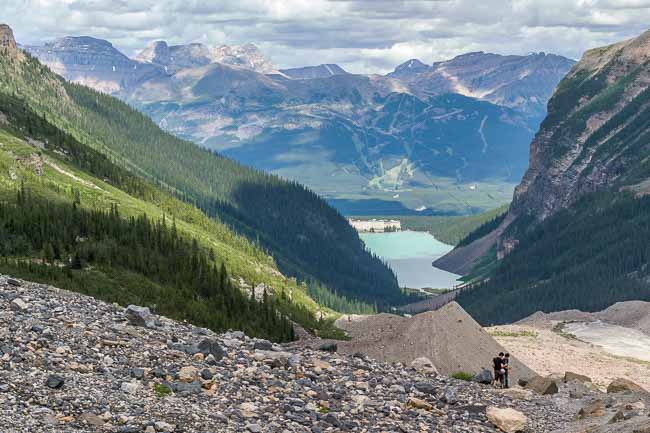 Hiking up to the Plain of Six Glaciers above Lake Louise, Banff National Park. 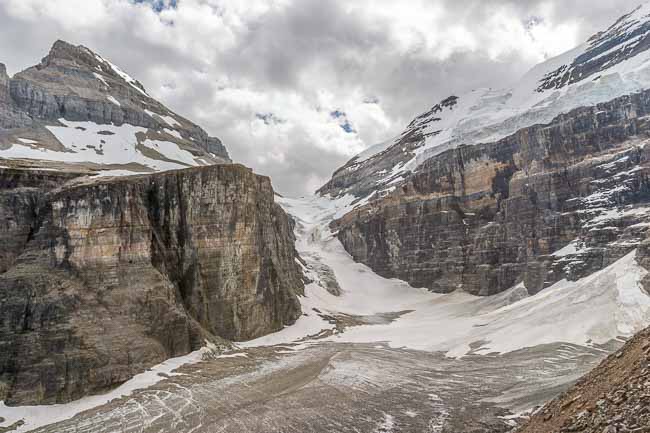 View of Mount Victoria and the lower flanks of Mount Lefroy and Victoria Glacier as seen from the trail above the Plain of the Six Glaciers Tea House.

The lower flanks of Mount Lefroy surrounded by the Victoria and Lefroy Glaciers as seen from the trail above the Plain of the Six Glaciers Tea House. 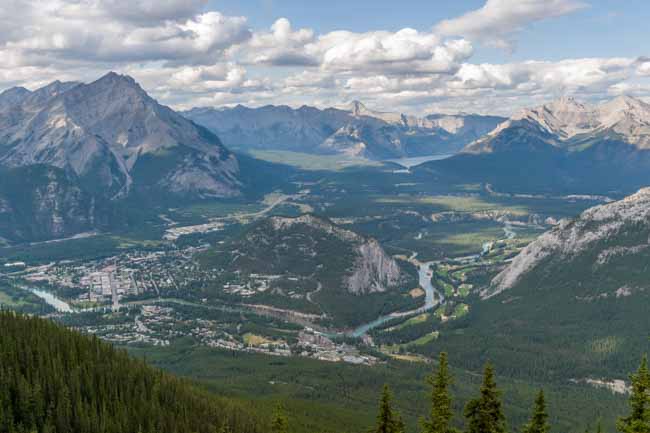 Above the town of Banff on the Banff Gondola.

Back in Banff, the weather was still sour so it was time for some indoor fun with a superb meal at Cilantro Mountain Cafe. Not cheap, but the mid-range menu is worth it after a day of hiking. 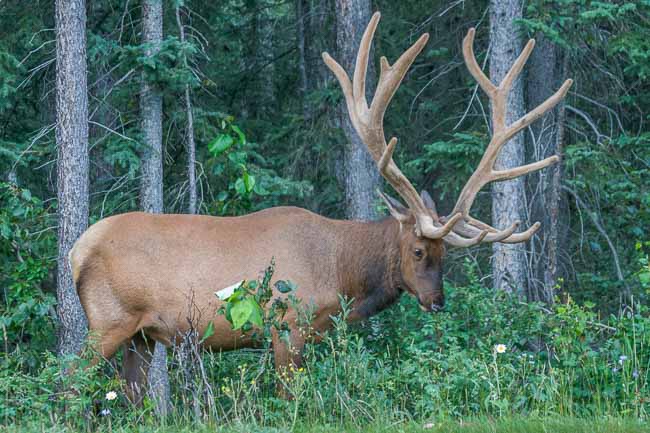 An early morning drive down the Bow River Parkway earned us some up-close time with a majestic elk.

We saw a bighorn sheep on the Plain of Six Glaciers hike, but we wanted more wildlife and we were willing to work for it. We get up at 5:30 am the next morning and took a drive out Bow Valley Parkway hoping to see some more species.

Almost immediately we saw three male elk with mid-sized velvet-covered antlers daintily nibbling their way through the grass along the side of the road. We pulled up right next to them and stopped which elicited little more than sideways glances. These guys knew that grass this succulent waits for no elk and they were not about to miss a blade of it because some sleep-deprived fools wanted to take their picture. 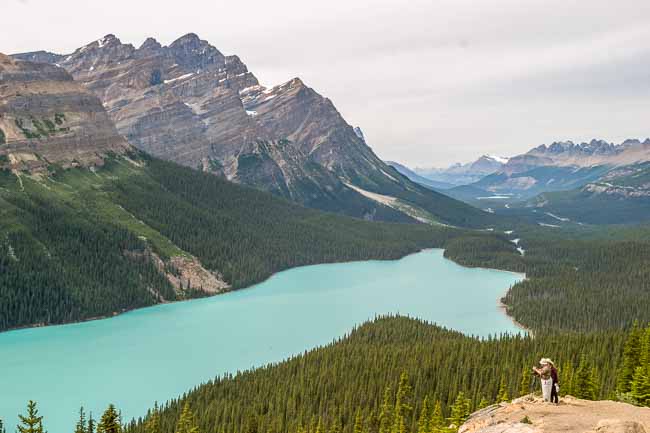 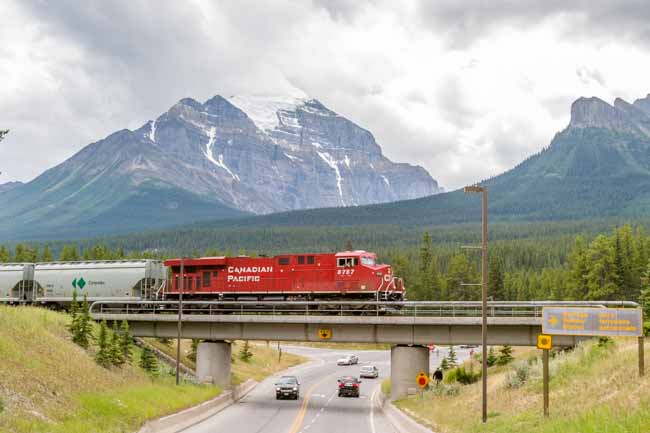 The Canadian Pacific Railway passes straight through the Banff National Park, which is fitting since much of the park’s infrastructure was originally built by the railroad.

But what about the area’s most famous hot attraction, Banff Hot Springs? Glad you asked. The Banff Hot Springs facility is beautiful and clean and spacious but the water was only 104 degrees Fahrenheit the evening we took a dip. We’re pretty sure we’ve had hotter baths. But it was relaxing and the dusky, evening sky above was clear and we stayed until closing time.

Where to sleep near Banff National Park

The Fairmont Banff Springs Hotel is famous for a reason. With hundreds of rooms there’s something for eveyrone and the hotel, very near the park, offers a wide range of amenities that are almost enough to keep you inside. 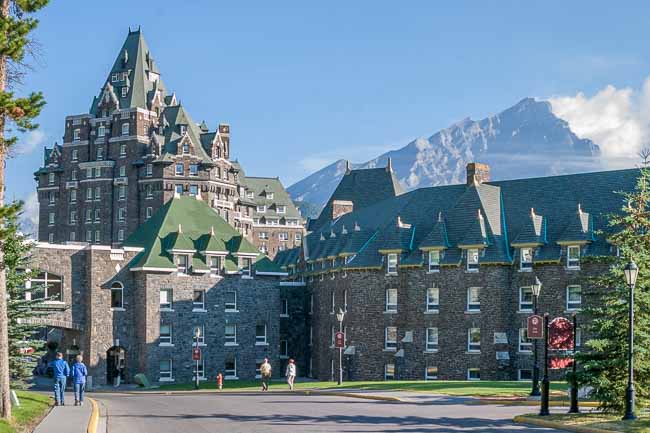 For more, read our full review of the Fairmont Banff Springs Hotel for iTraveliShop.