Visit these remote areas around Santa Cristóbal Island in the Galapagos Islands in Ecuador to explore the only place where you can see all three species of booby, land where Charles Darwin first set foot in the Galapagos, and see an iconic offshore formation. Here are highlights from boat trips to Punta Pitt, Cerro Brujo, and Kicker Rock. 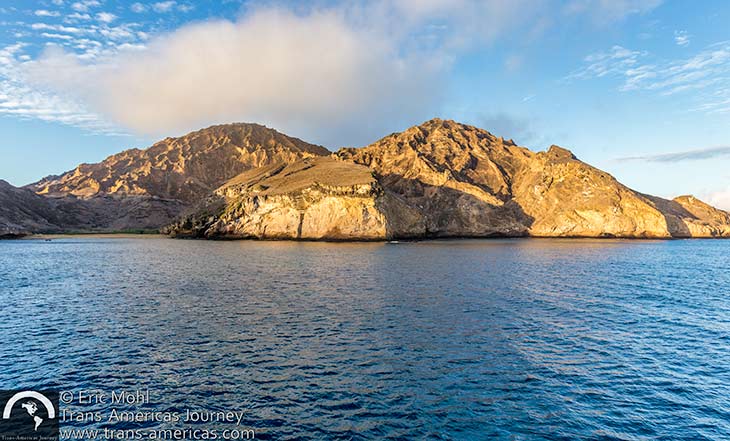 Approaching Punta Pitt on San Cristóbal Island in the Galapagos archipelago in Ecuador.

These destinations on San Cristóbal Island are only reached by boat. They can be visited on long day trips from Puerto Baquerizo Moreno, however, we visited these places as part of our itinerary during our trip on the Origin with Ecoventura.

Visiting Punta Pitt in the Galapagos

Punta Pitt (Pitt Point in English, named for British Prime Minister William Pitt) is the only place in the Galapagos Islands where you can see all three species of booby: red-footed, blue-footed, and Nazca. There’s a well-made trail on the island that lets travelers explore the landscape which features saltbush, Opuntia cactus, and Palo Santo trees. Sea birds, including frigatebirds, swallow-tailed gulls, storm petrels, all those bobbies, and more, make the most of this place as a resting and nesting spot.

Here are photos from Punta Pitt. 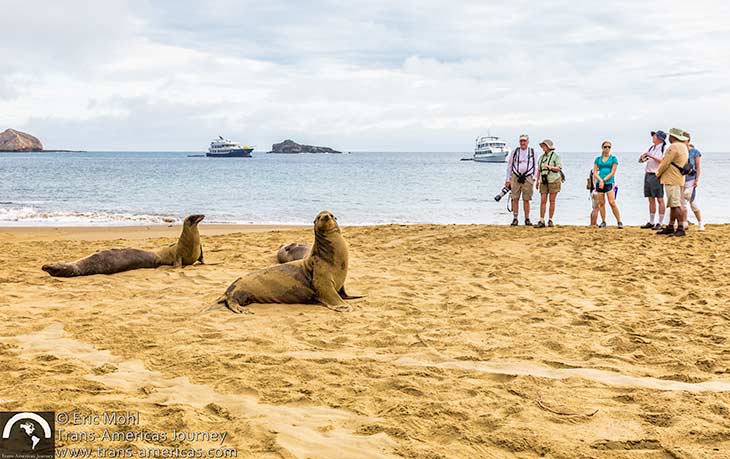 Beach exploration with the locals at Punta Pitt. 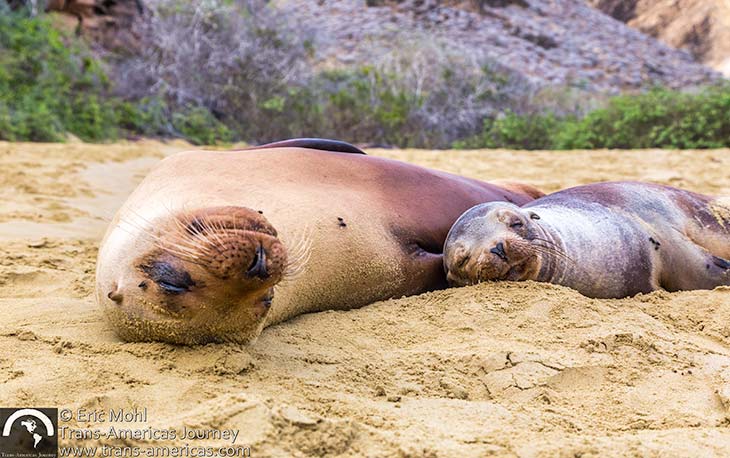 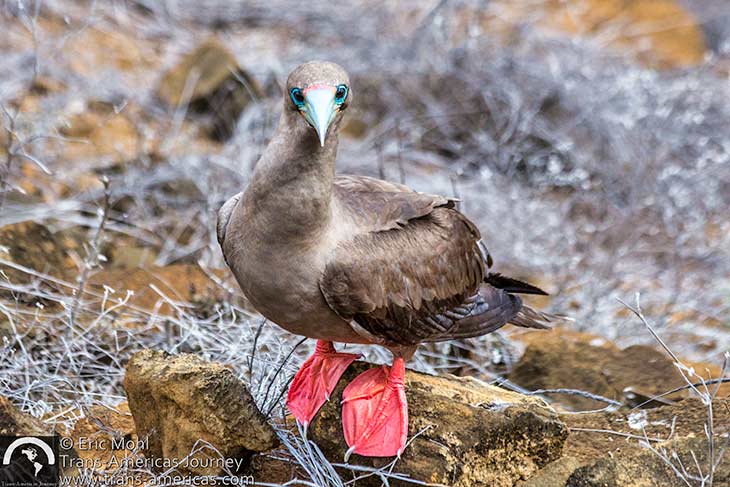 Punta Pitt is the only place in the Galapagos where you can see all three types of boobies including red-footed boobies (shown here), blue-footed boobies, and Nazca boobies. 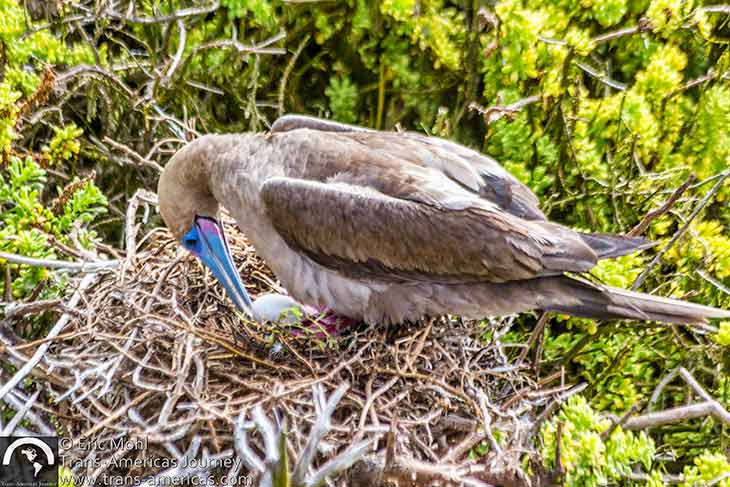 Red-footed boobies build their nests out of twigs. 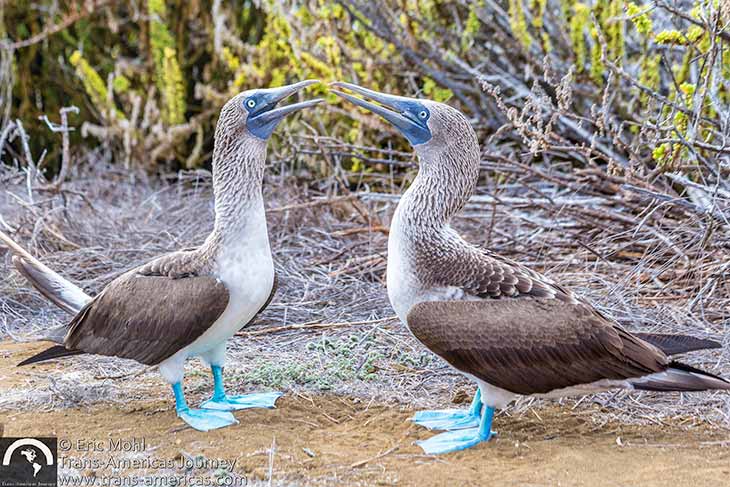 A courting pair of blue-footed boobies at Punta Pitt. 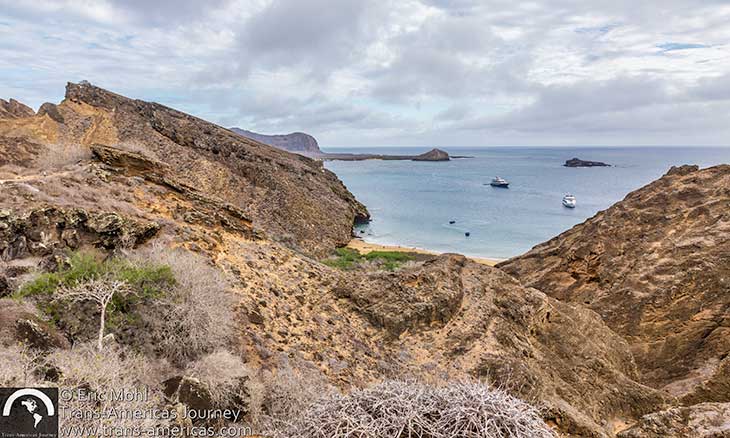 The barren terrain at Punta Pitt.

Visiting Cerro Brujo in the Galapagos

Cerro Brujo (Witch Hill in English) is where Charles Darwin is believed to have first set foot on land in the Galapagos. Modern travelers will be met with much the same sights that he saw: a beautiful white sand beach (some call it the most beautiful beach in the Galapagos) and an inland lagoon. This place is favored by sea lions and land and sea birds including blue-footed boobies, Nazca boobies, herons, frigatebirds, and more.

Animal highlights: We saw Galapagos sea lions, American oystercatchers (including chicks), fishing boobies, and marine iguanas. Unfortunately, we did not spot the San Cristóbal lava lizard or a brujo bird which are both endemic to this area.

Here are photos from Cerro Brujo. 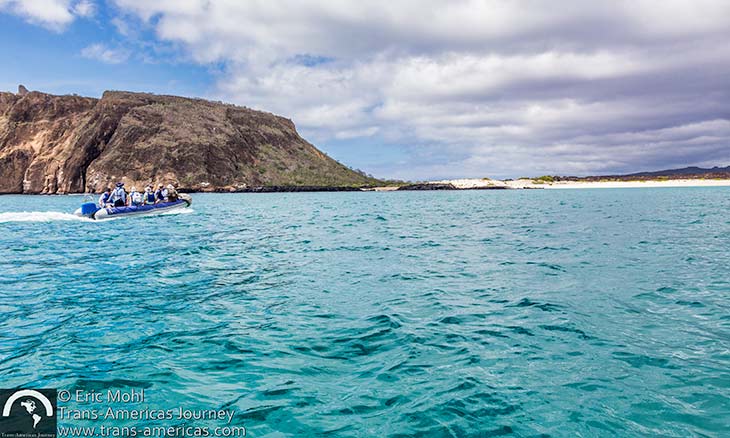 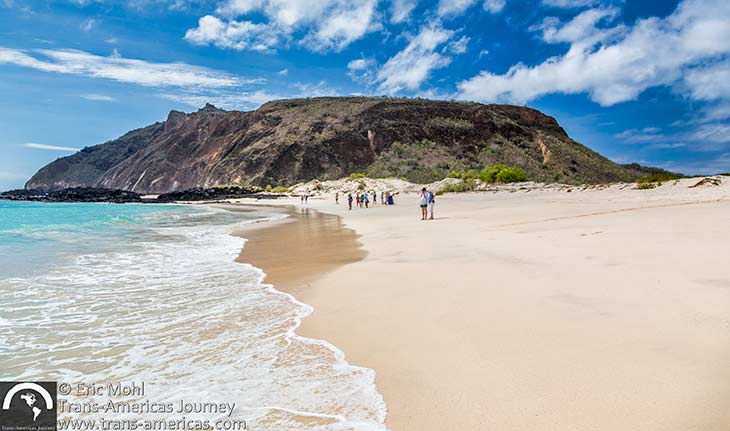 Exploring the beach at Cerro Brujo. 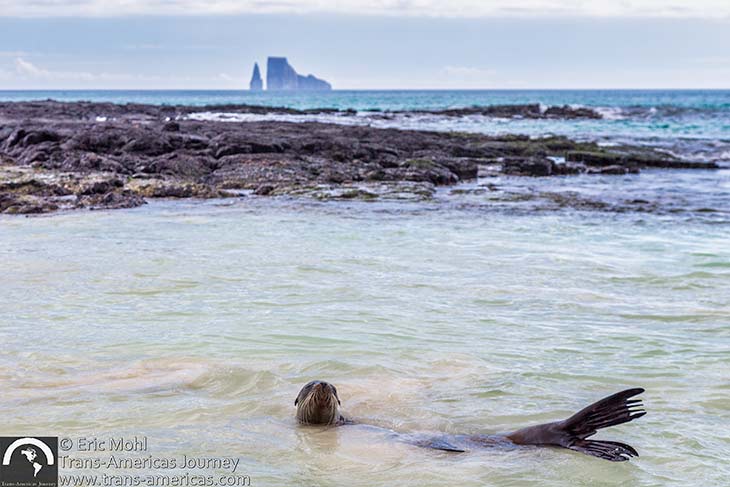 Galapagos sea lions often seem to be just fooling around, like this one at Cerro Brujo (with Kicker Rock in the distance). 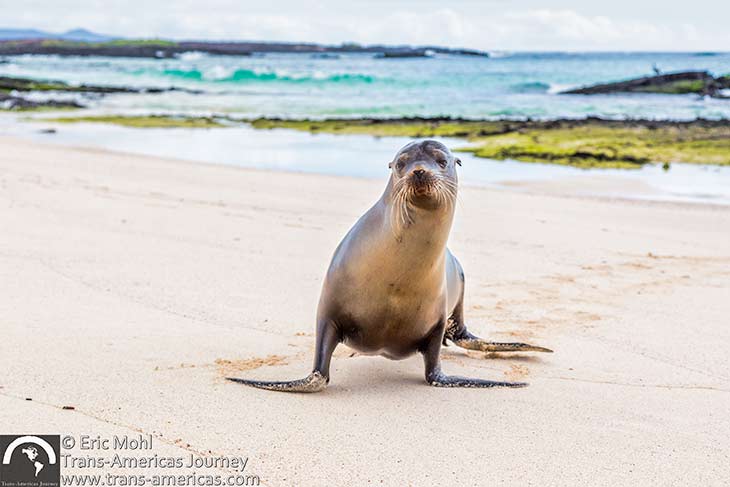 Human visitors to the Galapagos Islands must stay at least six feet away from wildlife, but many curious, fearless animals seem unaware of that rule. 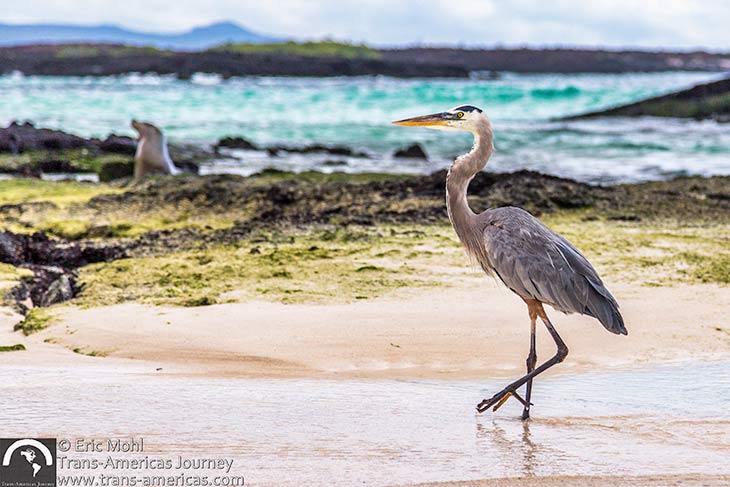 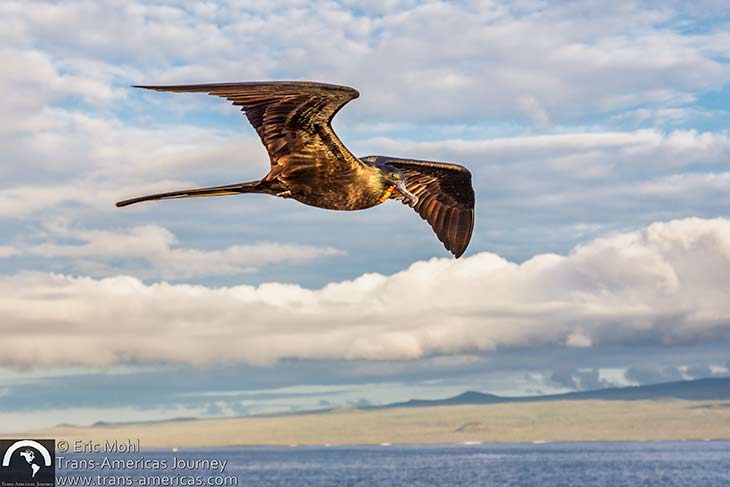 A frigatebird sails past us at Cerro Brujo. 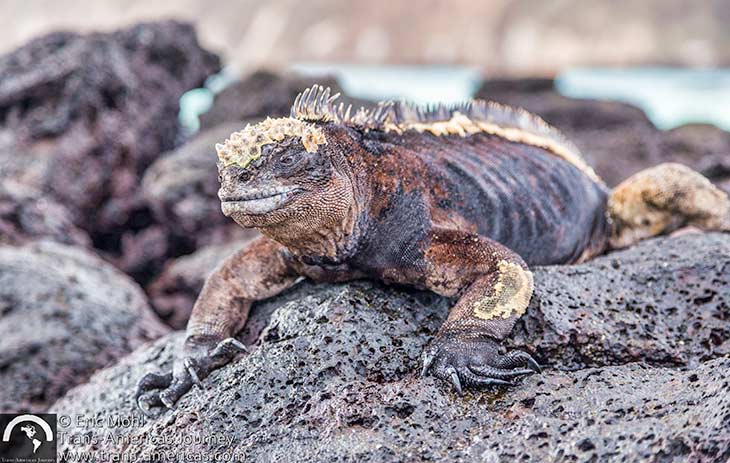 A marine iguana at Cerro Brujo rests up and warms up before diving back into the water to feed. 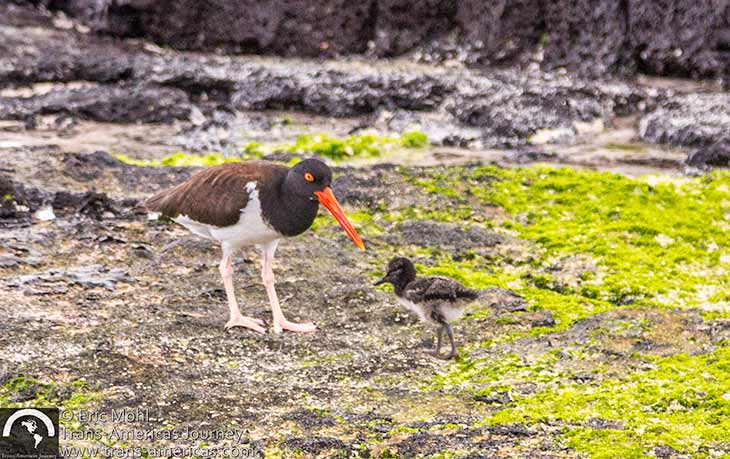 We saw many American oystercatchers in the Galapagos, but the only time we saw them with chicks was at Cerro Brujo. 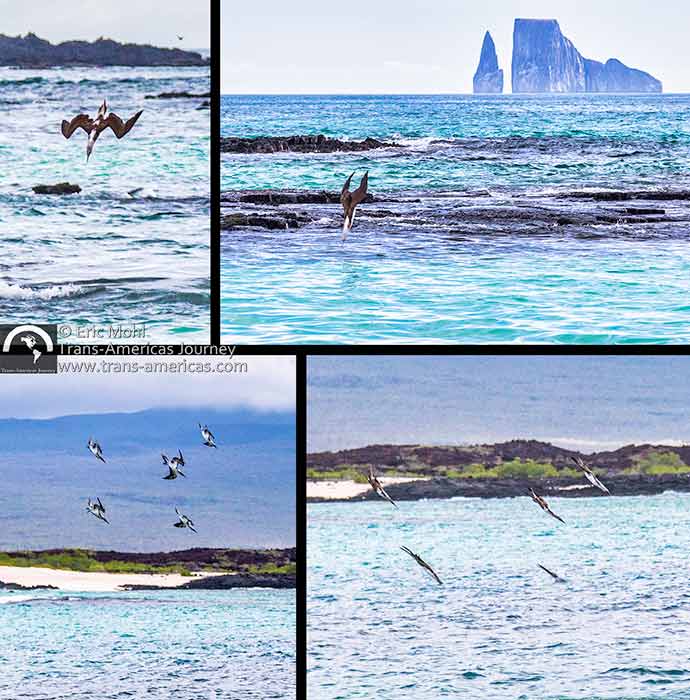 Blue-footed boobies transform themselves into torpedoes when they dive for fish.

Visiting Kicker Rock in the Galapagos

Kicker Rock (aka Sleeping Lion) is an iconic Galapagos site formed by a mostly-submerged tuff formation with just the tip jutting up out of the sea. You can book a day boat trip to Kicker Rock from Puerto Baquerizo Moreno (about 1.5 hours by boat each way) where you can snorkel or SCUBA dive around the formation. We cruised around the rock on the Origin, then got tempted off course a bit to do some whale watching nearby.

Here are photos from around Kicker Rock. 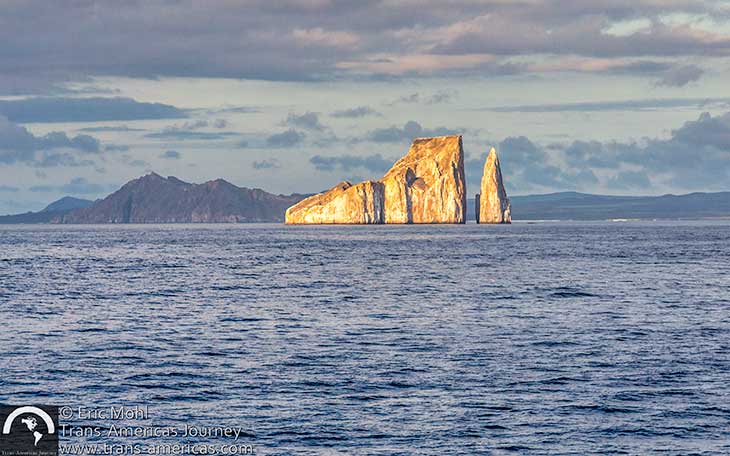 Kicker Rock off the coast of San Cristóbal Island.

During a cruise past Kicker Rock, our captain noticed whales nearby. 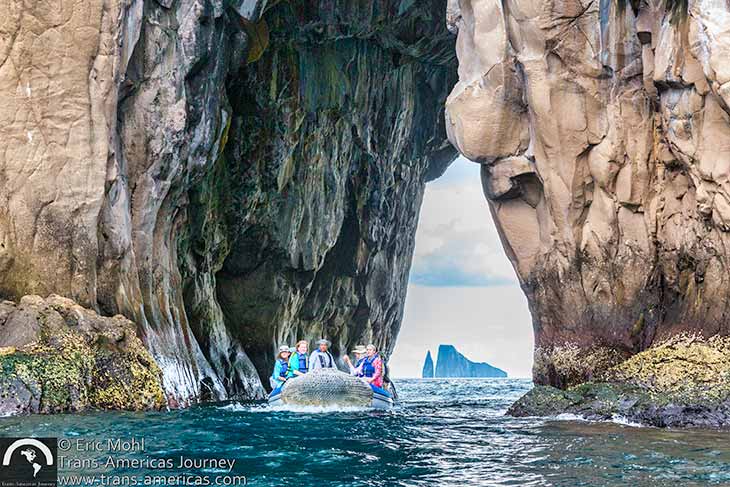 During our visit to Cerro Brujo, our guide took us on a zodiac side trip along the coastline of San Cristóbal to a natural tunnel which dramatically frames Kicker Rock in the distance.