Visitors to these remote areas of Santa Cruz Island in the Galapagos Islands in Ecuador can tour mangroves that harbor baby sharks, look for flamingos in a brackish lagoon, and even see nesting sea turtles. Here’s what to expect during these 4 top boat trips on Santa Cruz Island including Bahia Ballena, Black Turtle Cove, Cerro Dragon, and Bachas Beach. 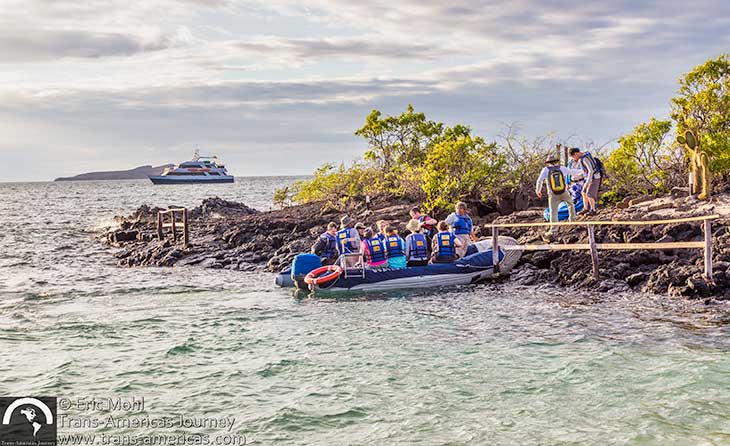 Travelers making the dry landing at Cerro Dragon in the Galapagos Islands in Ecuador.

Bahia Ballena (Whale Bay in English) can be reached during a day trip from Puerto Ayora or as part of your itinerary during multi-day boat-based cruises.  We visited Bahia Ballena during our cruise on the M/Y Grace with Quasar Expeditions. This place was the site of the oldest whaling camp on Santa Cruz island and features an arced beach covered in naturally green sand.

We visited in: March

Activities: boat tour of the bay and some tours also include a wet landing and hiking

Here are photos from our visit to Bahia Ballena in the Galapagos. 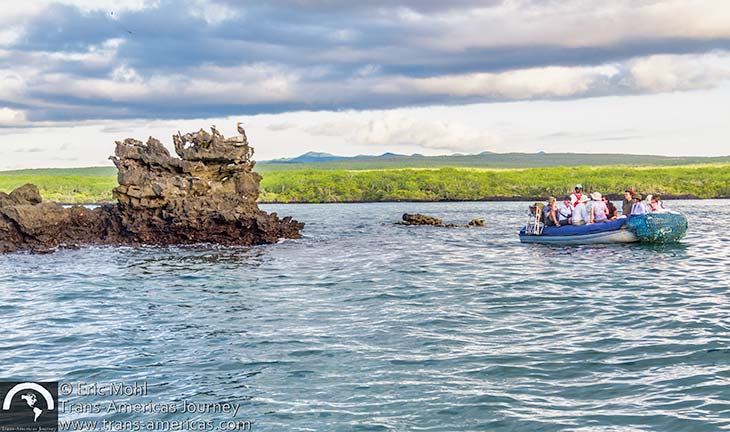 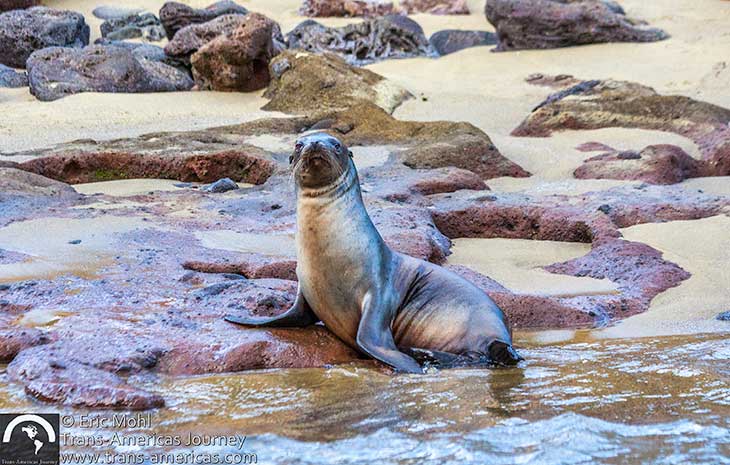 A Galapagos sea lion hauls itself out at Bahia Ballena on Santa Cruz Island. 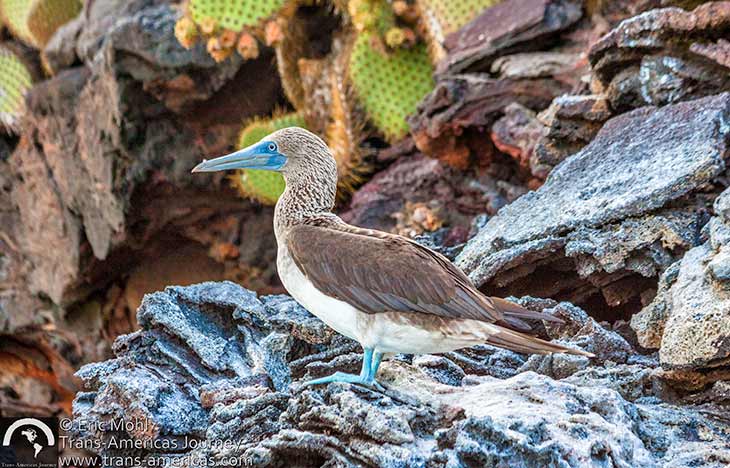 A blue-footed booby takes a break from fishing on a rocky outcrop on the shoreline around Bahia Ballena. 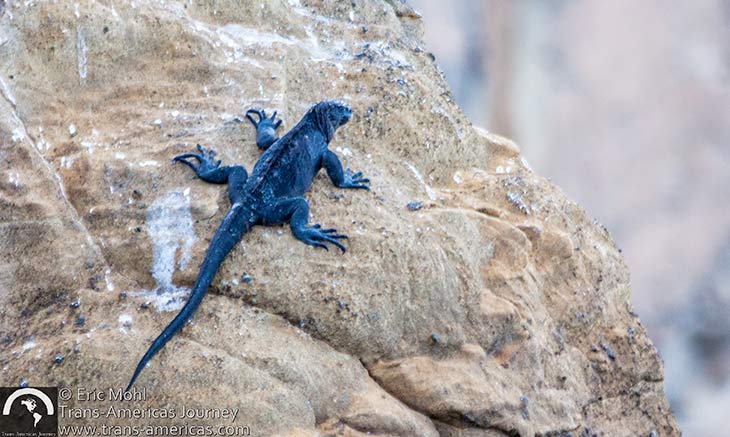 A marine iguana warms up in the sun before diving back into the waters of Bahia Ballena in search of food. 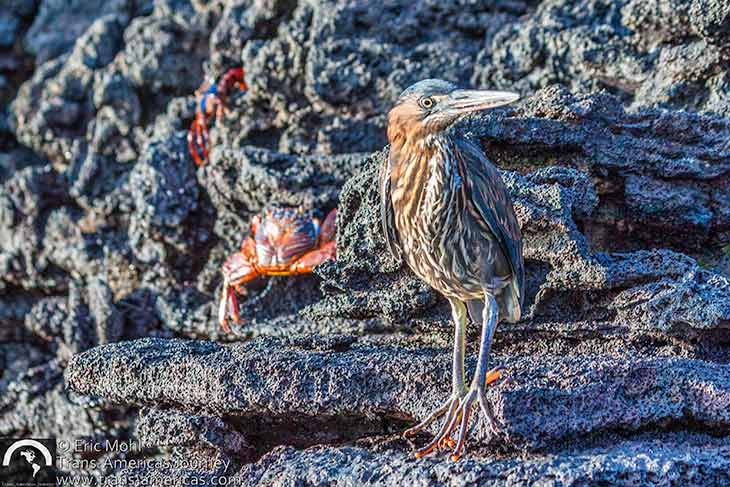 A striated heron concentrates on fishing while Sally Lightfoot crabs hang out behind it.

This shallow cove is lined with mangroves which provide a vital safe haven for babies of many, many species including reef sharks and Galapagos sharks. Think of it as a nursery for marine life. Black Turtle Cove can be reached during a day trip from Puerto Ayora or as part of your itinerary during multi-day boat-based cruises. We toured Black Turtle Cove in a zodiac as part of the itinerary during our trip on the M/V Eric with Ecoventura. It was one of the most peaceful outings in the Galapagos. Your boat will motor slowly as the pilot navigates carefully past the mangroves and your guide points out wildlife in the shallow water around you.

Here are photos from our visit to Black Turtle Cove in the Galapagos. 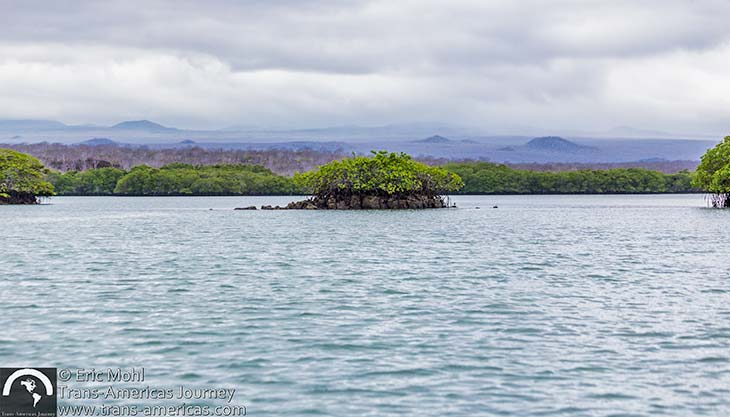 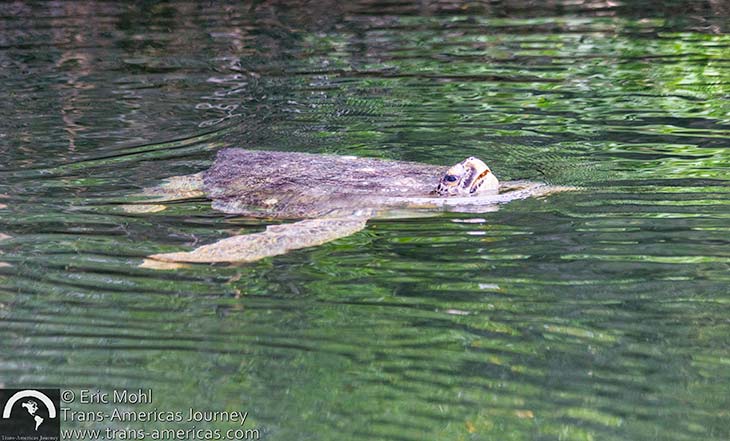 A sea turtle comes up for air near our zodiac in Black Turtle Cove. 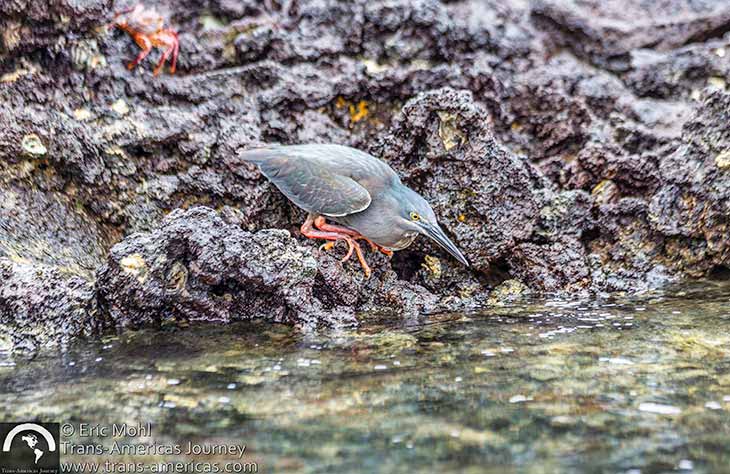 A lava heron on the hunt. 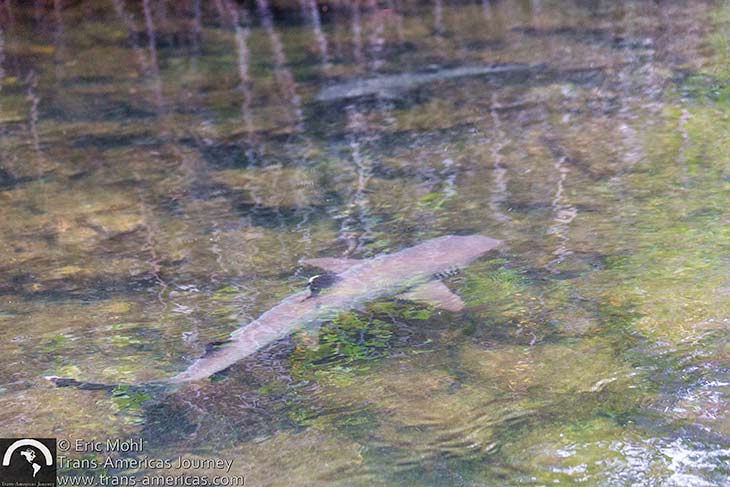 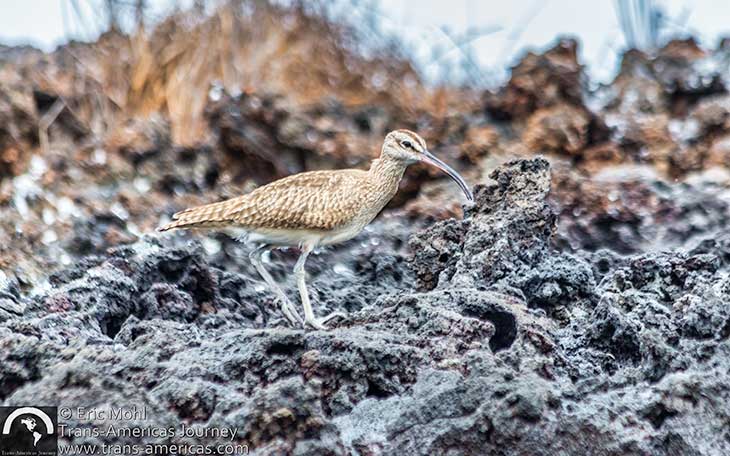 A whimbrel hunts in the lava crevices along Black Turtle Cove. 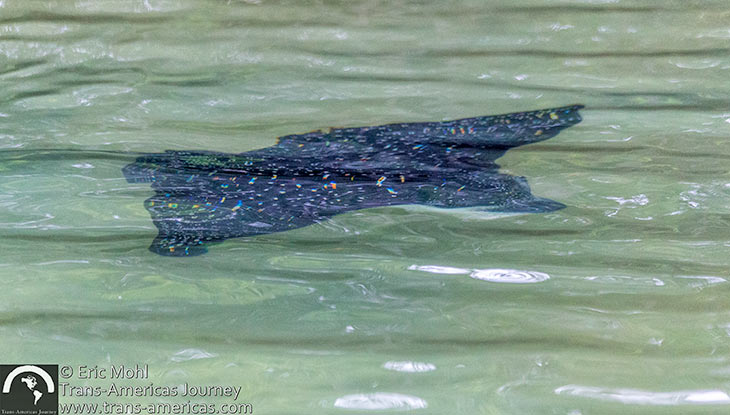 A spotted eagle ray sparkling in the sun in Black Turtle Cove.

Cerro Dragon (Dragon Hill in English), which we also visited during our trip on the M/V Eric with Ecoventura, gets its name from its large population of dragon-like land iguanas, but this species was threatened by invasive species like dogs, rats, and goats. This inspired a joint effort between the Charles Darwin Foundation and the Galapagos National Park to control non-endemic species and better protect the land iguanas. The pleasant hike here takes visitors along a beach then past palo santo trees and cactus (the land iguanas love to eat cactus flowers) on the way to a saltwater lagoon.

Activities: dry landing and hiking a 1 mile (1.6 km) trail across the beach to the lagoon and snorkeling in a bay

Animal highlights: We saw about a dozen land iguanas, marine iguanas, and a nesting sea turtle, and during certain times of the year greater flamingos can be seen in the lagoon. While snorkeling we saw…well you can see it too in our video at the end of this post.

Here are photos from our visit to Cerro Dragon in the Galapagos. 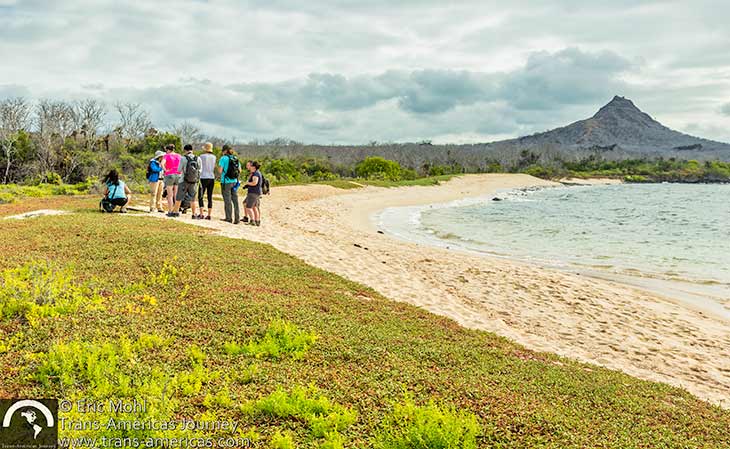 A land iguana and one of its favorite foods at Cerro Dragon. 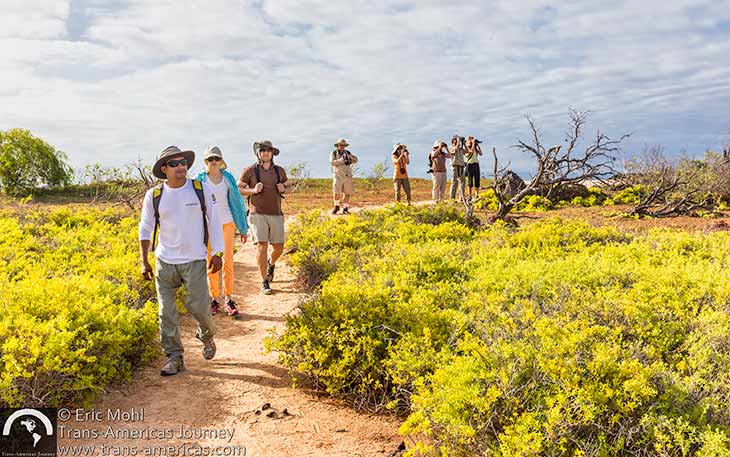 Heading out on the trail to a saltwater lagoon at Cerro Dragon. 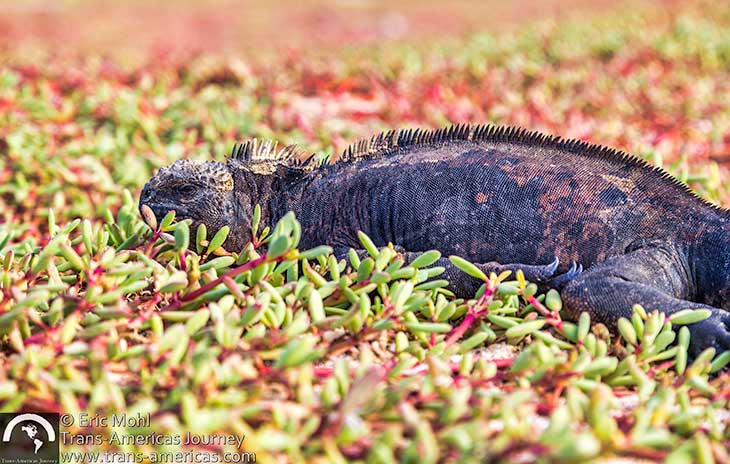 A marine iguana at Cerro Dragon. 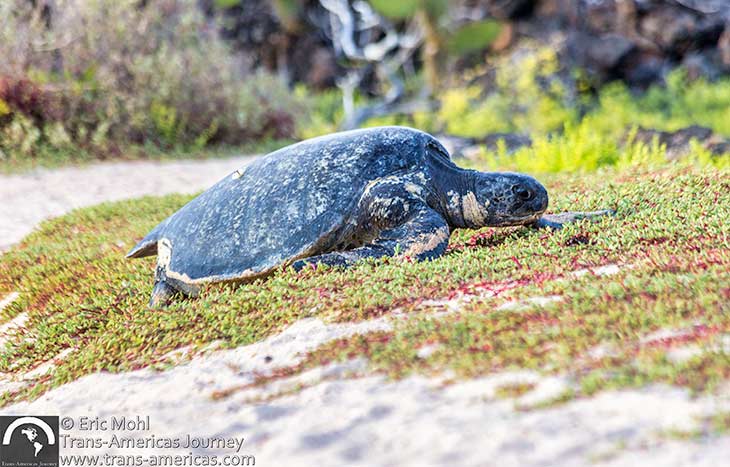 As we returned to our zodiac after exploring Cerro Dragon, we silently watched this female sea turtle haul herself onto the beach in search of a place to dig a hole and lay her eggs. 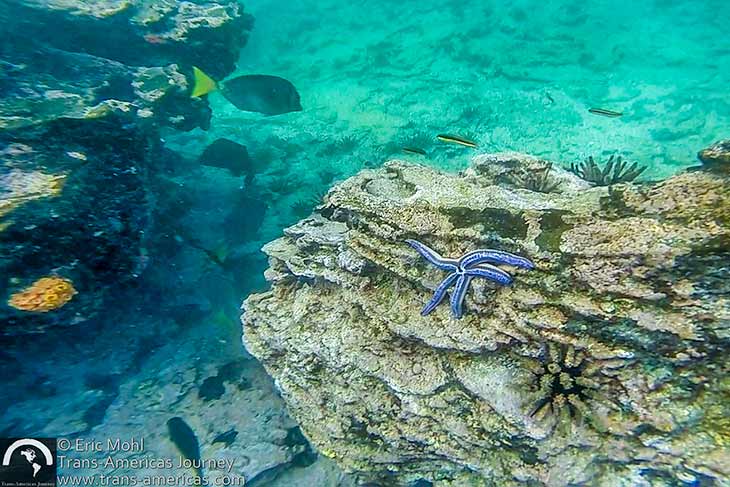 Clear water and plenty of life made snorkeling near Cerro Dragon a treat.

In the 1940s, parts of the Galapagos Islands were used by the US military. At the end of World War II, American soldiers left two barges at this beach. The name “Bachas” allegedly comes from the way the word “barges” was pronounced in Spanish. The highlight here is exploring 0.5 mile (1 km) long white sand beach which we visited during a guided excursion while we were staying at Pikaia Lodge.

Activities: wet landing and beach walk — some tours may also include snorkeling

Here are photos from our visit to Bachas Beach in the Galapagos. 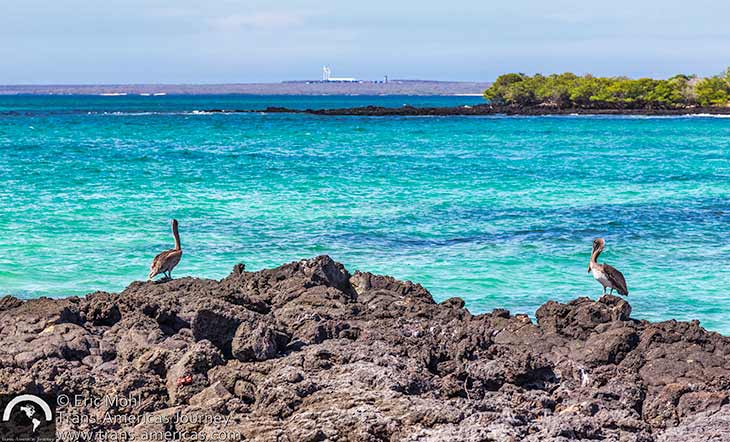 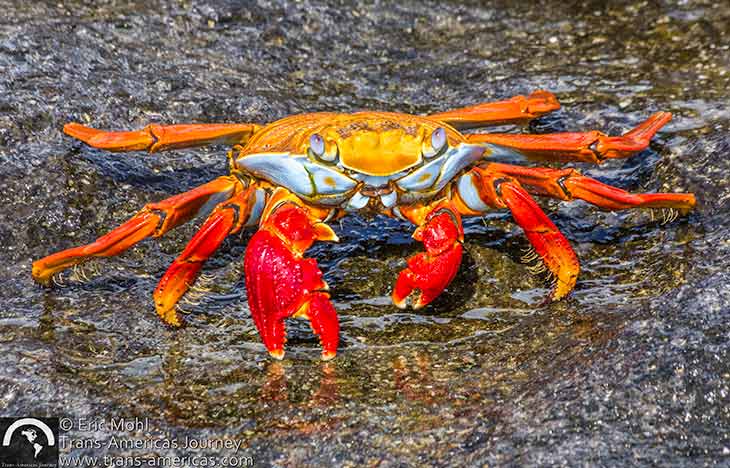 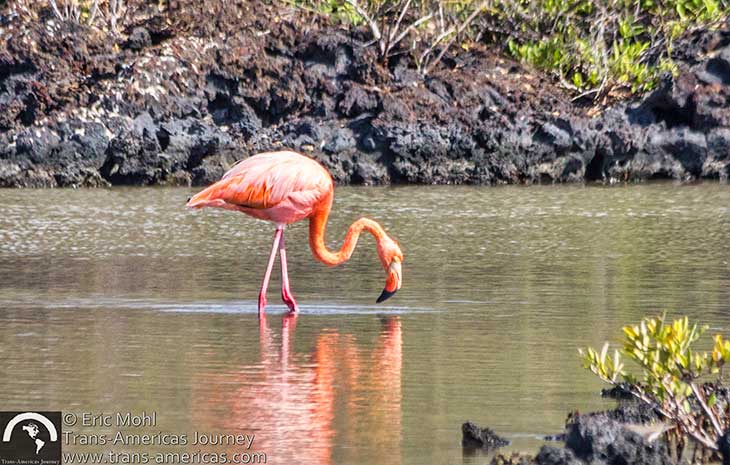 A greater flamingo in brackish water at Bachas Beach. 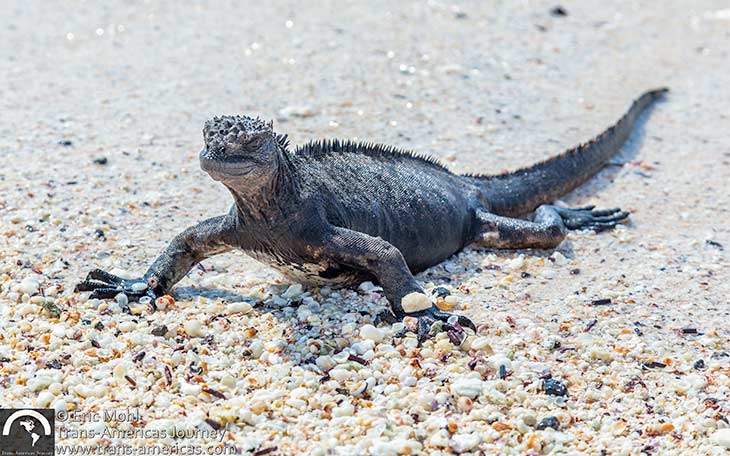 A marine iguana warms up on the white sand and coral beach at Bachas Beach. 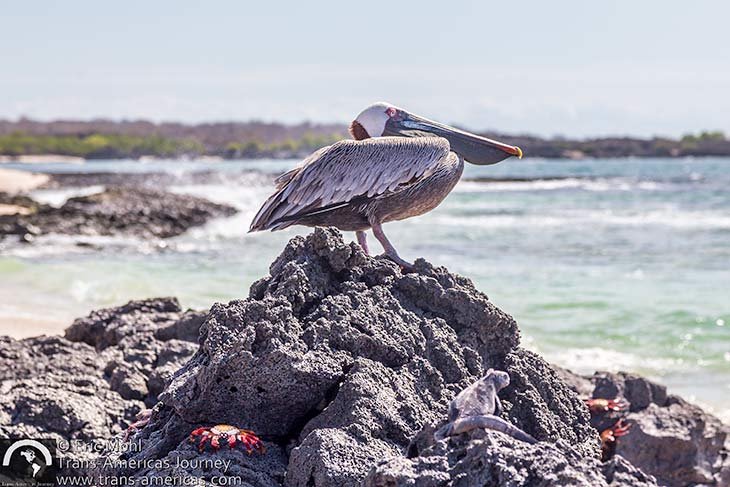 Life everywhere you look: a brown pelican shares a spot with Sally Lightfoot crabs and a marine iguana. 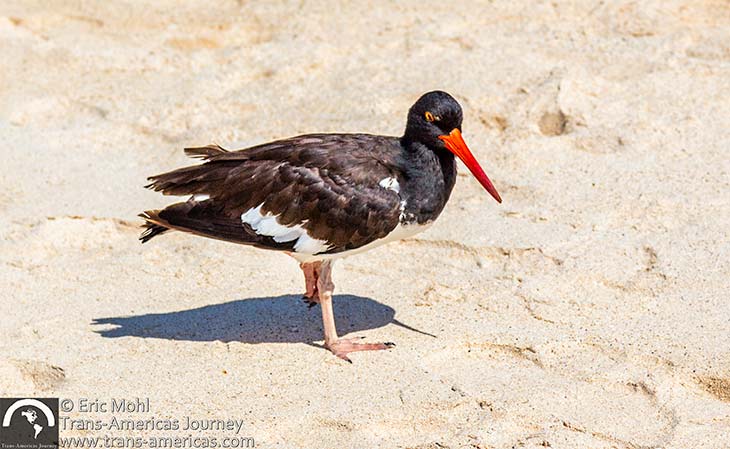