Slumbering sea lions, roaming land iguanas, and the epic mating dance of the blue-footed booby are just some of the highlights travelers can look forward to when they visit to North Seymour Island, South Plaza Island, and Daphne Island in the Galapagos Islands in Ecuador. 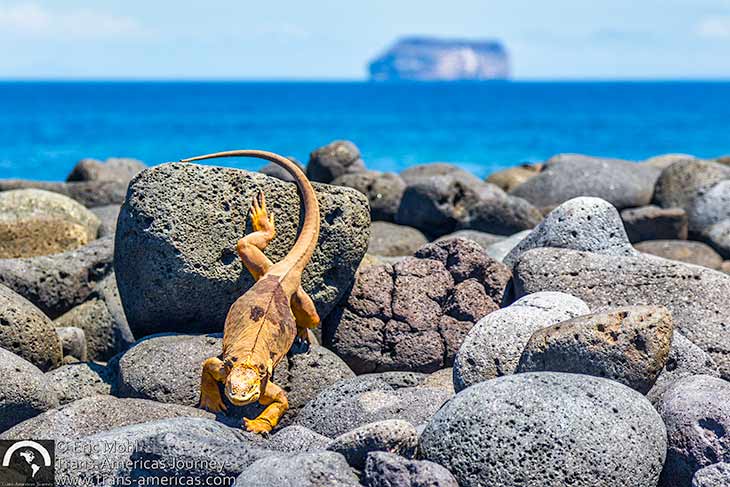 A unique hybrid land iguana rules the roost on North Seymour Island in the Galapagos archipelago in Ecuador.

These small islands in the Galapagos archipelago, which was designated a UNESCO World Heritage site in 1978, can be visited by booking a day trip from Santa Cruz Island as long as there are landing slots available, per Galapagos National Park rules, and enough other people to fill the tour boat. A more reliable way to visit these Galapagos destinations is on a multi-day boat cruise (like we did) because these islets, in the central region of the Galapagos Islands in Ecuador, are a mainstay of many cruise boat itineraries. 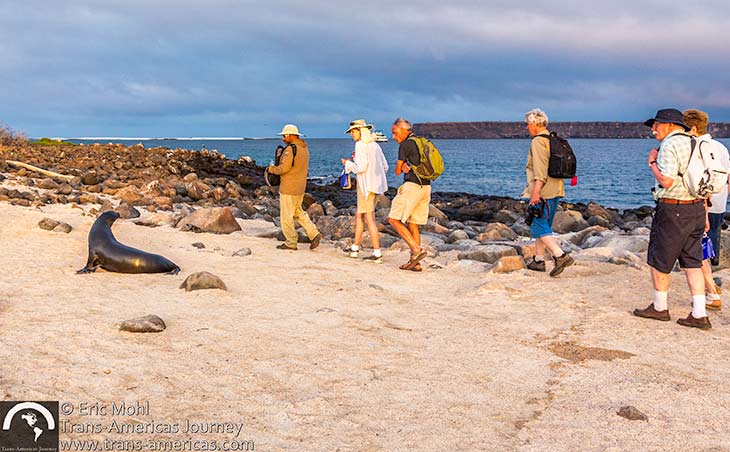 Galapagos travelers arriving on North Seymour Island which is an important mating and breeding ground for sea birds.

This small island is north of Santa Cruz Island and very close to Baltra Island (aka South Seymour). We visited this island twice, once during a guided excursion with Pikaia Lodge and again during our trip on the Origin with Ecoventura. Both times we were amazed by the bird activity on North Seymour which is a mating and nesting mecca for magnificent frigatebirds, great frigatebirds, and blue-footed boobies. 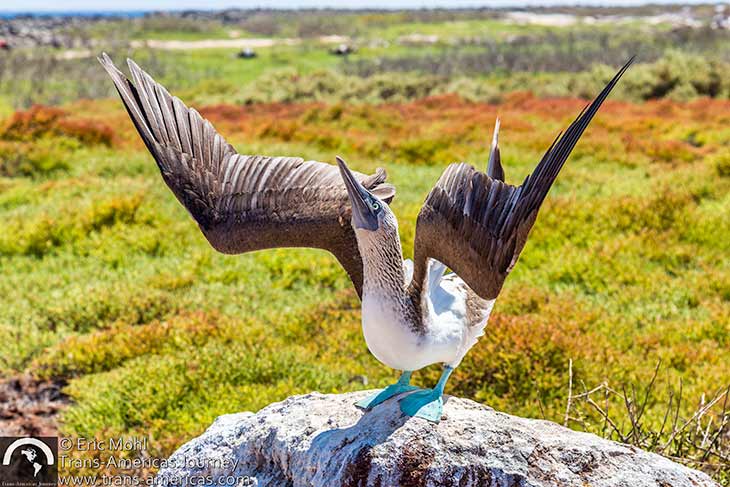 Depending on the season, visitors can see courting rituals of these species including the dramatic and dorky sky pointing of the male blue-footed boobie which includes pointing their beaks at the sky while making a whistling noise, tipping their tail feathers up, and partially extending their wings in a sort of avian modern dance. 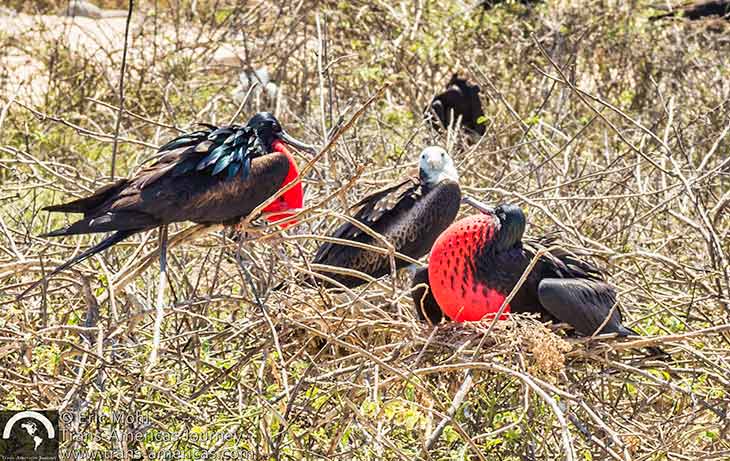 Blue-footed boobies also show off their blue feet as part of their mating ritual. The bluer the feet, the healthier the bird. See this full display in our video at the end of this post. Meanwhile, male frigatebirds puff out their signature red chest pouch to catch the eye of females. 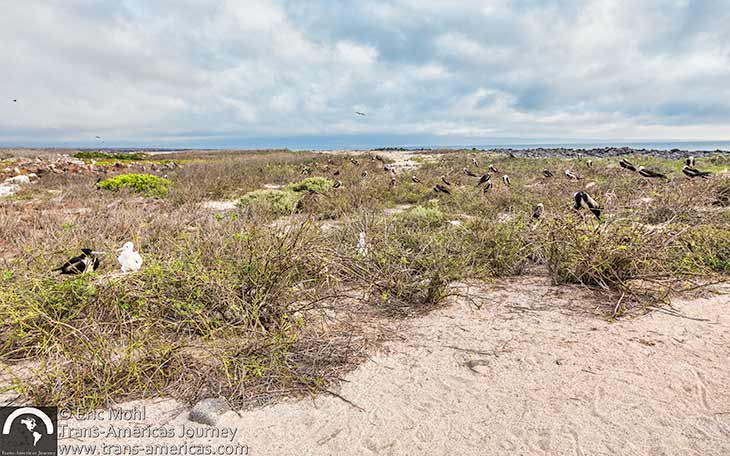 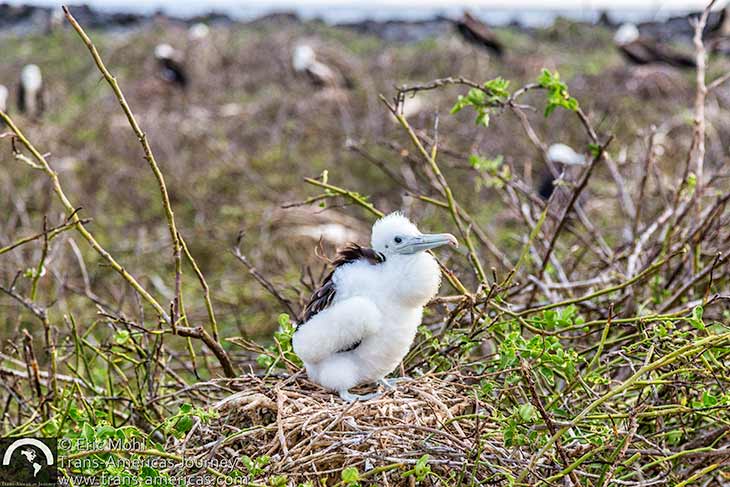 This blue-footed booby chick has a long way to go before it’s seaworthy.

Once mating is over, couples tend to their nests, eggs, and young. The frigatebirds fill low branches of scrubby trees with their nests and the nests of blue-footed boobies, made partially from guano, seem to cover the ground. It’s easy to get distracted by the show going on all around you, but as you walk along the short, flat, loop trail past ground nests and scores of birds, be careful to avoid accidentally stepping on a nest or an egg. 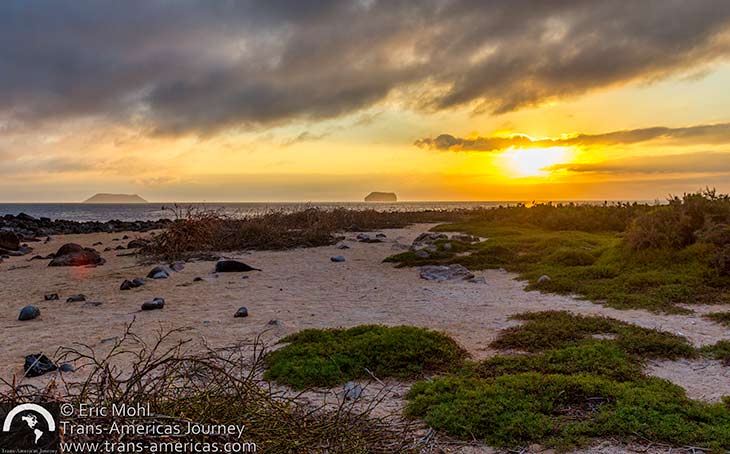 Sunset from North Seymour Island in the Galapagos.

Our walk on North Seymour Island ended on a sandy bluff overlooking the sea at sunset as the boobies and frigates settled down for the night and the light danced on the water below us.

Animal highlights: While snorkeling around North Seymour Island we saw blacktip reef sharks (including a few that played off the back of our boat when we anchored), whitetip reef sharks, a spotted eagle ray, many large fish including triggerfish, and a Galapagos fur seal (which isn’t a true seal because its ears are visible). While hiking on North Seymour Island we saw many red-billed tropicbirds, great frigatebirds, magnificent frigatebirds (some with fluffy chicks), blue-footed boobies (some with eggs and some with chicks), Galapagos doves, and sea lions. 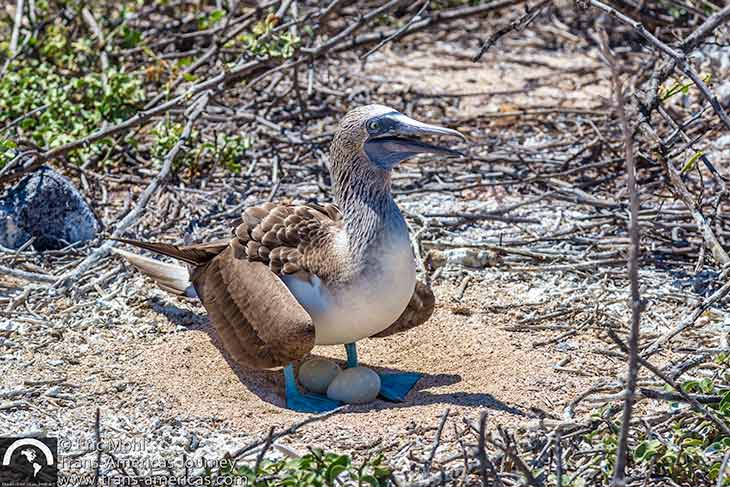 A blue-footed booby with two eggs in its nest on North Seymour Island. 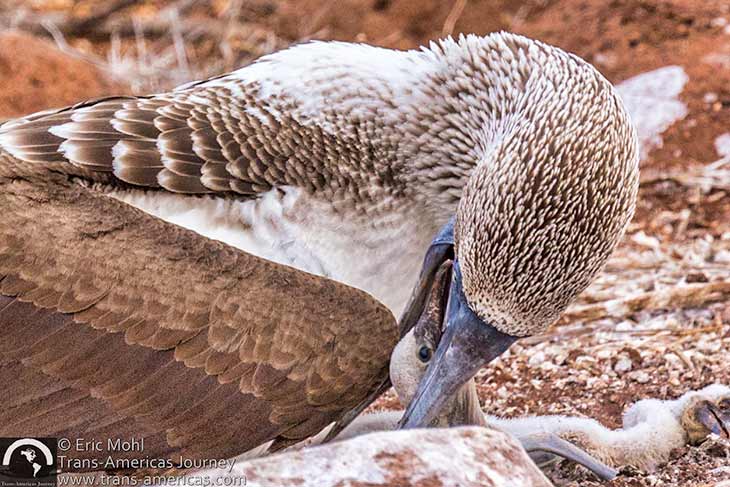 A blue-footed booby feeding a chick on North Seymour Island. 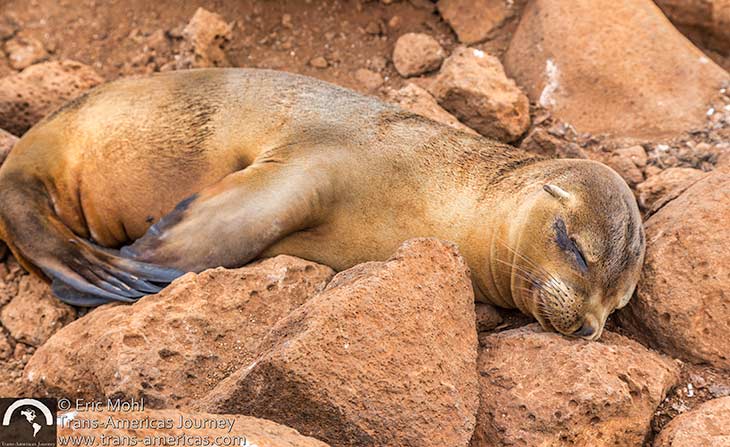 Baby Galapagos sea lions are even cuter when they’re napping.

South Plaza Island was formed by lava streaming to the surface from the ocean floor. At just 0.05 square miles (0.13 square km), this nearly perfectly flat formation is the smallest islets open to tourists. It’s mate, North Plaza Island, is separated from South Plaza by a narrow channel and it isn’t open at all. 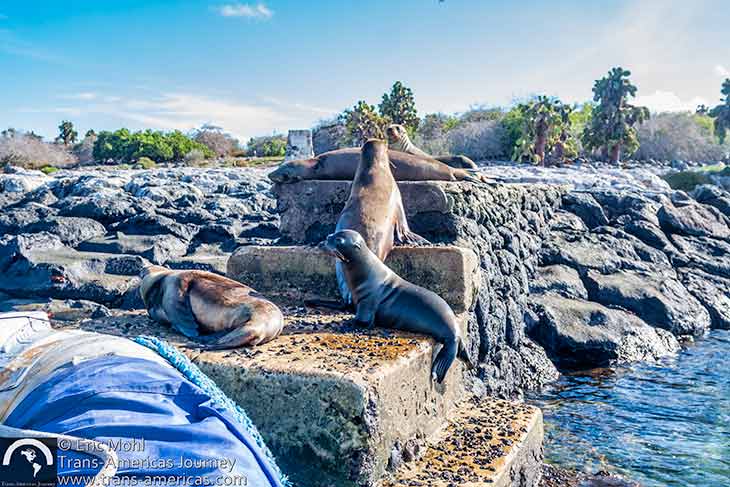 Our sunbathing sea lion greeting party on South Plaza Island in the Galapagos.

We visited South Plaza Island twice, once during our trip on the M/Y Grace with Quasar Expeditions and again during our trip on the Origin with Ecoventura. Both times we were greeted by sunbathing Galapagos sea lions covering the small, narrow, man-made jetty where dry landings are made. We all clapped to encourage them to move, but no dice so we ended up walking carefully around the creatures in order to reach the trail on this island. 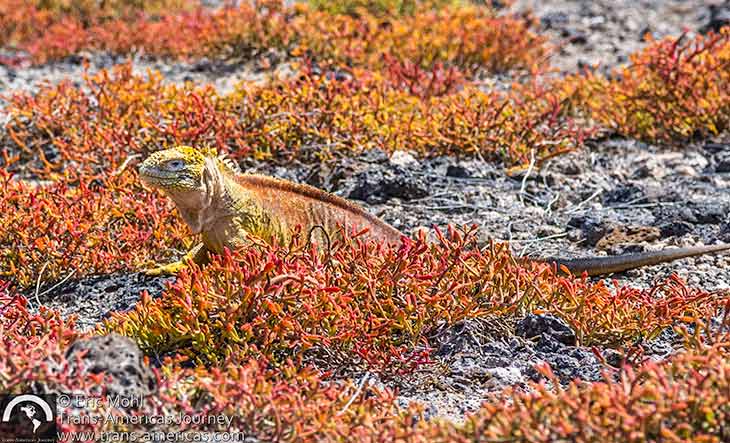 This particular version of land iguanas are only found on South Plaza Island and some experts believe they’re a hybrid, the result of a land iguana breeding with a marine iguana.

The first thing we noticed was vibrant sesuvium ground vegetation (aka Galapagos carpet weed) covering much of the South Plaza Island. This plant is bright green in the rainy season but slowly changes color to yellow, orange, red, and even purple in the dry season. 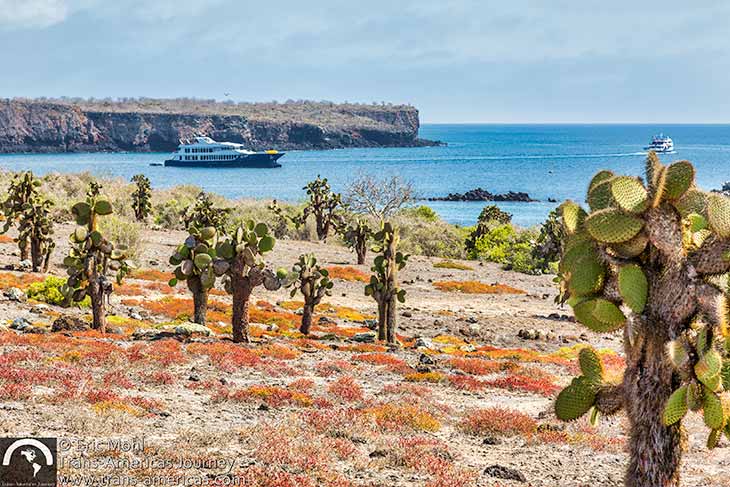 The land iguanas on South Plaza Island love to eat the flowers produced by these Opuntia cacti.

We visited in: May and March

Activities: dry landing and walking along a short flat trail 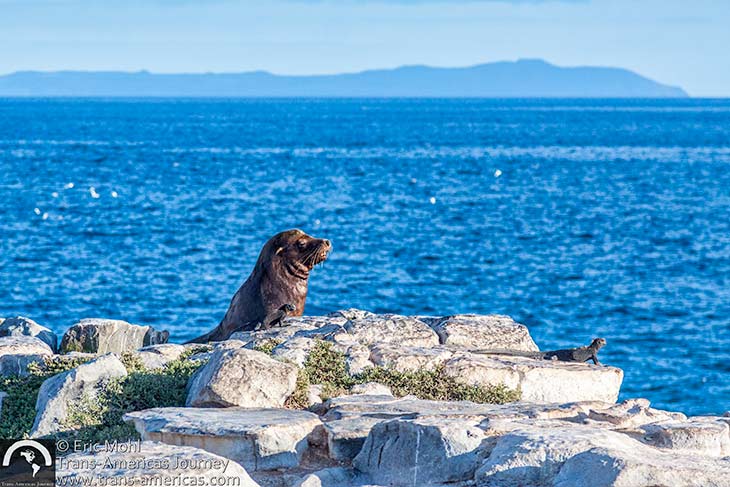 Sightings of Galapagos fur seals, which are not true seals because their ears are visible, are uncommon but we saw one on South Plaza Island. 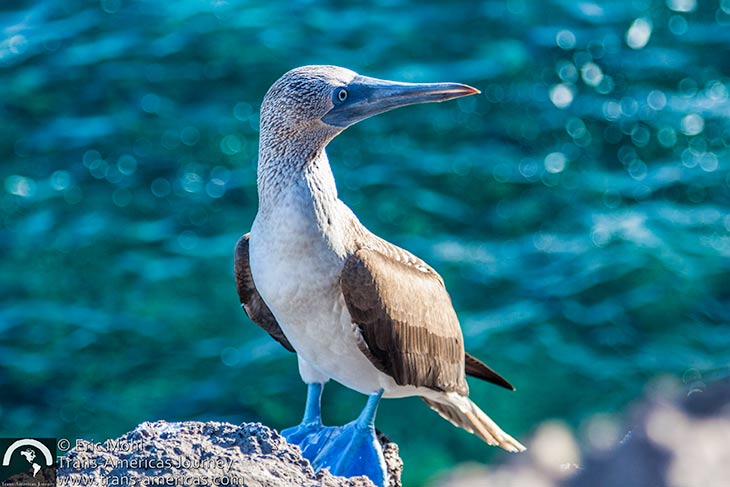 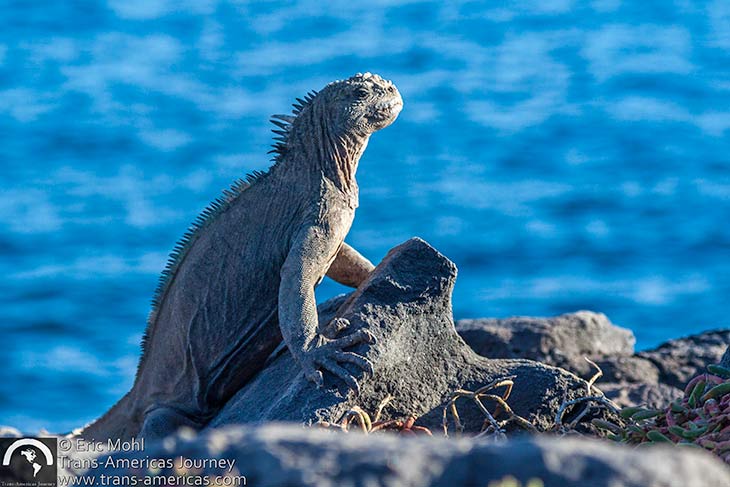 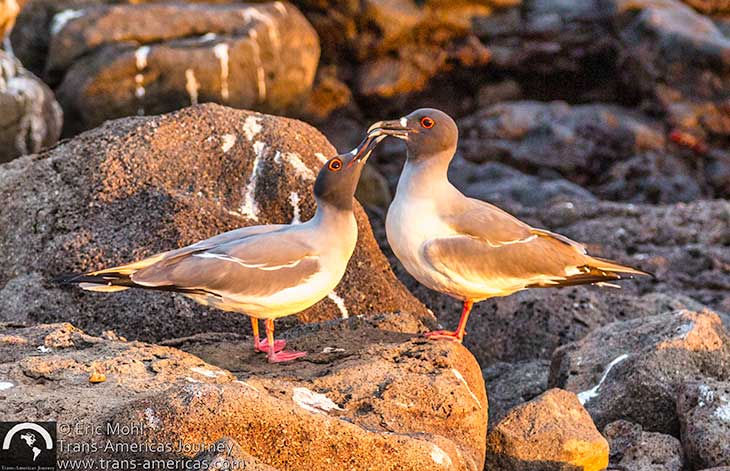 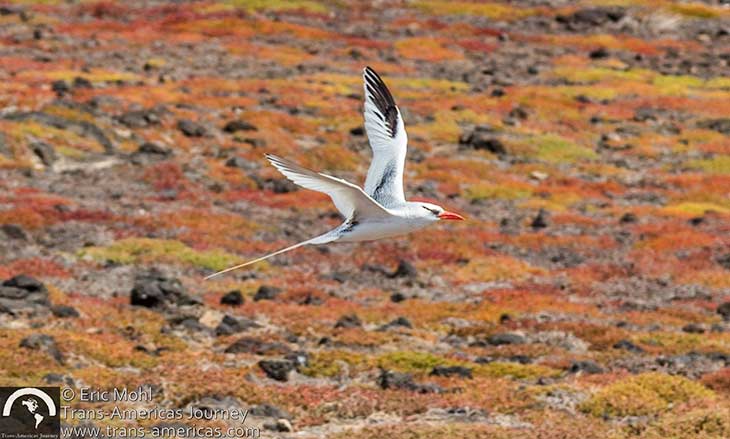 The red-billed tropicbird is a flamboyant sea bird that can be hard to spot and photograph because it’s almost always in motion. 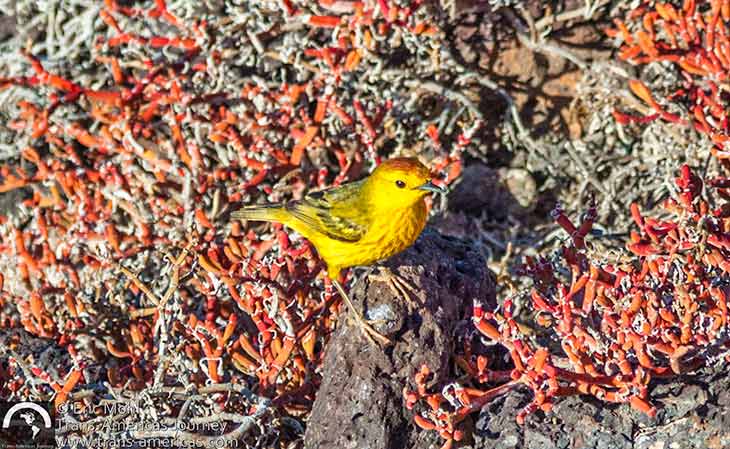 A yellow warbler on South Plaza Island in the Galapagos. 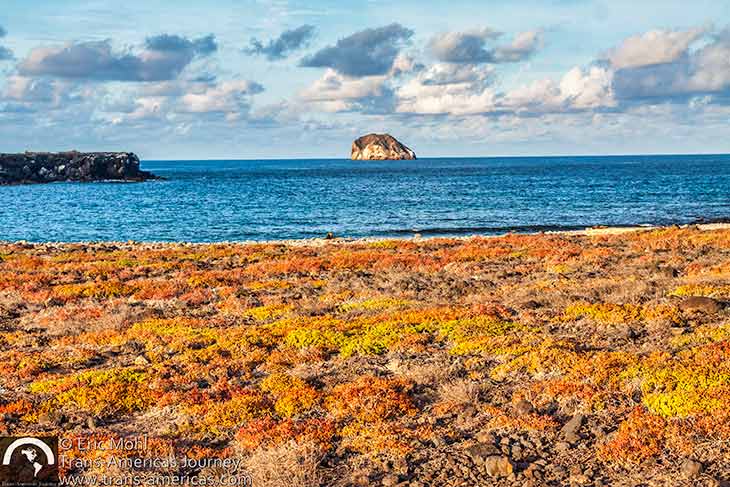 Perhaps the laziest exploration we did in the Galapagos Islands was our boat tour around Daphne Island, during a guided expedition from Pikaia Lodge, north of Santa Cruz Island. Treeless Daphne Major is a tuff crater with a coastline that rises 395 feet (120 meters) from sea level. 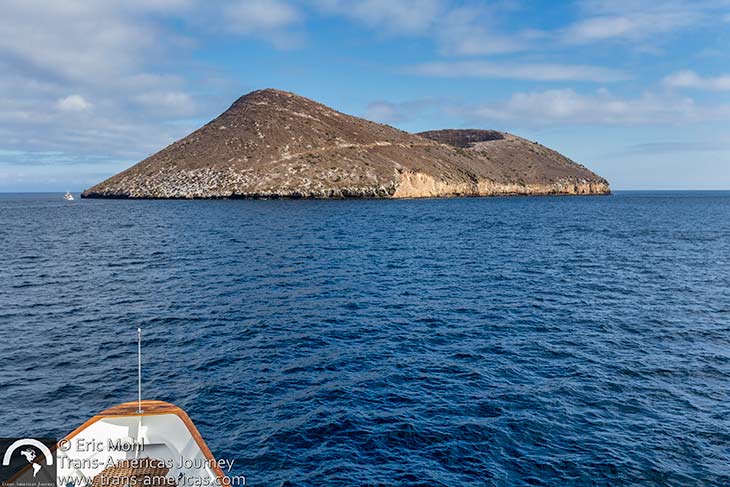 Barren and caved in, Daphne Island may look lifeless but it’s an important nesting area for boobies and other sea birds.

Our visit was a slow boat trip around that dramatic coastline, though some tours also include a walk on the island to see palo santo trees, blue-footed boobies, Nazca boobies, Darwin finches, and red-billed tropicbirds.

Activities: boat tour around the island and some tours include a landing and short hike as well

See more travel highlights from our visits to North Seymour, South Plaza, and Daphne Islands, including the blue-footed booby mating dance, in our Galapagos travel video below.