Welcome to part 1 in our Best of the Trans-Americas Journey 2015 series of posts. Part 1 is all about the To Travel Adventures of the past year of travel on our little road trip through the Americas including cruising the Amazon River in Peru (in luxury and in a hammock), playing with gunpowder in a bar in Colombia, and sky biking through the treetops in Ecuador (don’t miss our Amazon drone footage). Part 2 covers the Best Food & Beverages of 2015, part 3 covers the Best Hotels of the year and part 4 tells you all about our Top Travel Gear of the Year.

In 2015, the Trans-Americas Journey explored Colombia, Ecuador, and Peru and we drove 7,210 miles (11,603 km) doing it. Want more geeky road trip numbers like how much money we’ve spent on fuel and how many borders we’ve driven over? Check out the our Trip Facts & Figures page.

And now, in no particular order, here are the…

Best walk through the tree tops: It’s more than a third of a mile (500 meters) long and up to 115 feet (35 meters) above the ground. It sways and creaks as it connects more than a dozen different platforms. It’s supported by enormous rain forest trees and there’s nothing else like it in the Peruvian Amazon basin. We’re talking about the Ceiba Tops Canopy Walkway at Explorama Lodge from which you can see toucans, tree frogs, monkeys and more all at eye level. Check out our Amazon drone footage over the Canopy Walkway, above. 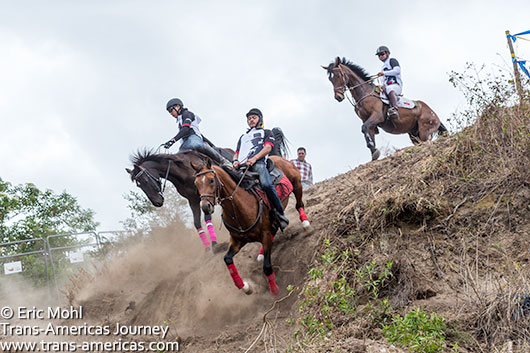 Racing after Zorro in Ecuador.

Best insane horse race: Every October the town of Ibarra in northern Ecuador hosts a race that includes hundreds of horses and riders who parade around town, then leap down a series of steep cliffs before taking part in a track race in pursuit of a rider dressed as Zorro. Yes, that Zorro. It is breathtaking in more ways than one. Learn more about the annual Caceria del Zorro in our story about Ecuador’s craziest horse race for Afar. 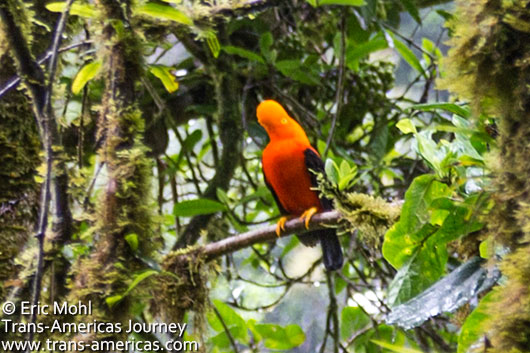 That is a real thing and it’s the national bird of Peru.

Best cock sighting: The national bird of Peru is called the Cock of the Rock. It is a crazy looking thing, but not how you’re thinking. It’s also pretty rare and seeing one is not a guarantee. Seeing five in one day without a guide is pretty extraordinary, but that’s exactly what happened when we hiked the trail to the Gocta Waterfall in northern Peru. Just after reaching the 4km mark on the 5km trail we heard a really weird noise–like alien frogs. We stopped and looked around and soon saw a bright red flash in the rainforest. We hung around and looked and listened some more and then we saw three male Cock of the Rocks in the same tree just off the trail. They hung around for more than five minutes before flying off. On our way back out we saw another Cock of the Rock alone in a tree around the 3km marker. Our advice is to keep your eyes and your ears open on this trail. And even if you don’t see any Cock of the Rocks, the waterfall is worth is. At 2,530 feet (771 meters) Gocta Waterfall is one of the tallest free-falling waterfalls in the world. 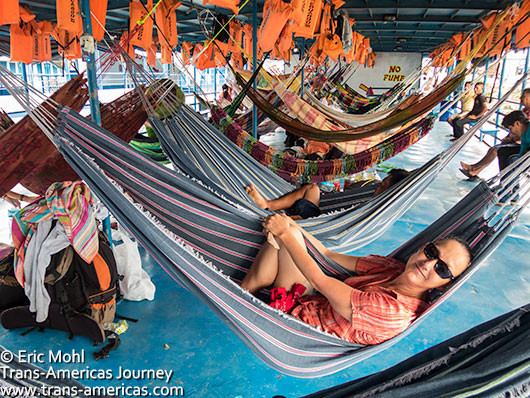 Karen taking a slow boat up the Amazon River in Peru.

Best bare bones Amazon River trip: At an average up river speed of less than 10 miles (15 km) per hour, it takes more than three days to travel up the Amazon River by cargo ferry from Iquitos to Yurimaguas, Peru (you can hack off a day or so going downstream in the other direction). We slept on the deck in hammocks, spent a lot of hours spotting blue and yellow macaws and pink river dolphins with our binoculars, and generally slowed down to river time. It was like taking a multi-day trip on the Mississippi but with rarer wildlife. 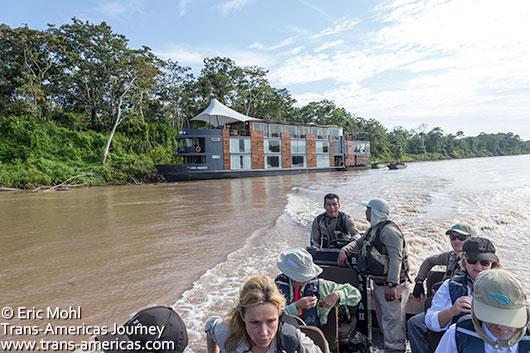 Leaving the luxury Aria river boat behind for a day of exploring the Amazon in Peru.

Best super luxe Amazon River trip: On the extreme other end of the Peruvian Amazon River Trip experience scale you will find the Aria Amazon river boat. This floating luxury hotel and fine dining restaurant lived up to the substantial hype with some of the best food we’ve had in Peru so far (the menu was created by Executive Chef Pedro Miguel Schiaffino who runs the award-winning Malabar restaurant in Lima), exceptional service, chic rooms with floor to ceiling windows, great guides, and, of course, all that Amazon. Did we mention the air conditioning and the hot tub? 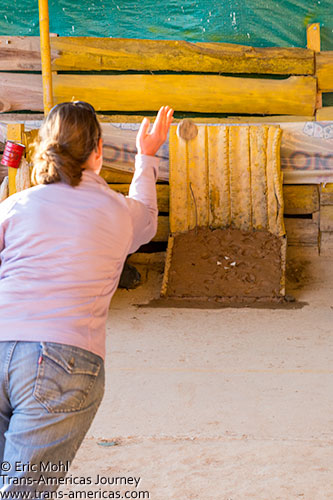 Best explosive bar game: It’s called tejo and it involves a heavy metal disc (called a tejo) which you toss underhand toward an angled board covered in wet clay. Your goal is to hit pieces of paper stuffed with gun powder which are arranged around a metal ring pressed into the clay. You know you’re doing it right when the reaction between your tossed tejo, the gun powder and, the metal ring causes an explosion. We played it in the otherwise tranquil mountain town of Salento, Colombia at the Los Amigos bar where they have a massive open-air tejo area set up in the back. Pay 1,000 COP (about US$0.40) per person, grab a cold beer for 3,000 COP (about US$1.00), choose one of the half dozen or so tejo setups and start tossing. You earn one point for the tejo which lands closest to the ring. You get three points for an explosion. You get six points for landing in the center of the metal ring and causing an explosion. You get nine points for landing in center of the metal ring without causing an explosion. The first person who racks up 25 points first wins. Though Karen hates loud noises, she somehow won anyway. 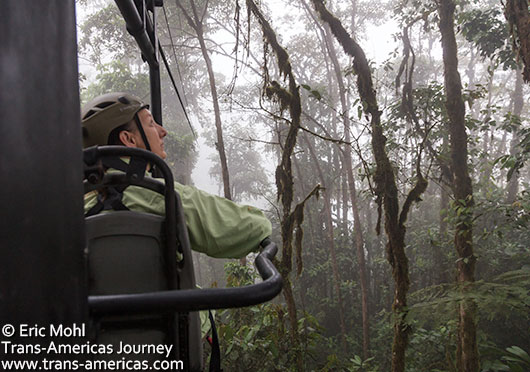 Karen sky biking through the rainforest canopy at Mashpi Lodge in Ecuador.

Best place to bicycle through the air: Masphi Eco Lodge in Ecuador is remarkable for a number of reasons, including top luxury deep in the rainforest and breathtaking architecture. Mashpi is also home to the only sky bike in the country. What is a sky bike? It’s an ingenious contraption that allows you to pedal your way across a taught line high above the ground. Think of it as horizontal zip lining on a bike. At Mashpi they’ve installed their sky bike through a particularly lovely patch of cloud forest and a leisurely round trip between two platforms gives sky bikers eye-level views of the treetops and the flowers and critters that live there.

Best death road: There are two ways to travel between Macoa and Pasto in Colombia: via a normal highway or via something called the Trampoline of Death. Guess which one we chose…To assuage her nerves, Karen crushed the pre-drive to do list. Water bottles were filled. Tire pressure was checked. The oil level was monitored. We were ready for the steep grades, blind corners, narrow stretches where two vehicles can’t possibly pass, potholes, rock slides, and whatever else something called the Trampoline of Death might have in store. What we weren’t ready for was a recently graded surface, helpful safety signs, and guardrails. Guardrails? We still had fun on this epic drive and it is still challenging and requires even more concentration than usual, but the moral of this adventure is: don’t judge a road by its nickname. Check out the time-lapse video from our death road drive, above. 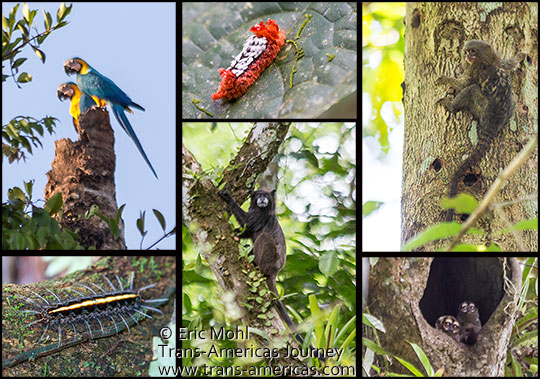 Just a few of the critters we saw in the Cuyabeno Amazon area of Ecuador.

Best Amazon adventure destination in Ecuador: Ecuador is blessed with a number of different areas from which travelers can access the Amazon Basin. We spent weeks exploring the Amazon along the Napo River out of a town called Coca which is the most popular gateway. Then we visited the Cuyabeno Wildlife Reserve in the Amazon Basin and it blew our minds. The waterways in the Cuyabeno area of Ecuador are much smaller and they flood and recede throughout the year. There are also far fewer lodging options in the Cuyabeno area than there are along the Napo which means fewer humans. This means the animals are more common and much easier to see. In three days we saw pink river dolphins, the smallest monkey in the world (the pygmy marmoset), huge tracts of primary rainforest, toucans, a pygmy potoo (look it up), and more. Lodges in the Cuyabeno area of the Amazon Basin are fairly basic with varying degrees of electricity, hot water, etc. We recommend Tapir Lodge where the food is great, the solar and generator electricity is reliable, and the private rooms are clean and comfortable. The biggest asset at Tapir Lodge is Kurt the owner. He is passionate about his slice of paradise and works hard to make sure his guests fall in love with it too. 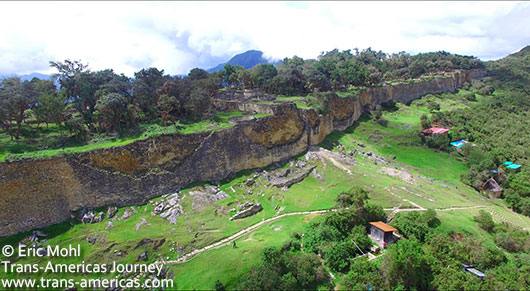 Best first Incan archaeological site: During the course of our Trans-Americas Journey we’ve explored more than 100 archaeological sites through the US, Mexico, Belize, Guatemala, Honduras, and El Salvador. None of them have been Incan sites, however, until we crossed into Peru and headed straight for the Kuelap Fortress, which is actually a pre-Incan site that was built by the Chachapoyas people in the 1500s. The massive stone wall that encloses this site is nearly 2,000 feet (600 meters) long by nearly 400 feet (119 meters) wide. In places, the wall is 62 feet (19 meters) high. Kuelap held thousands of people at its peak in distinctive round stone houses with thatch roofs. Despite its name, some archaeologists believe that Kuelap probably wasn’t a fortress at all but more of a sacred area used for ceremonies and rituals. Visiting Keulap recently got easier and more adventurous with the opening of a 2.5 mile (4 km) cable car to the site. Get more details about that in our story about the Kuelap cable car for Bravo Jet Set.