It felt good to get back on the Alaska Highway, which we hadn’t been traveling on since our brief brush with it back where it begins (or ends, depending on your perspective) in Dawson Creek. 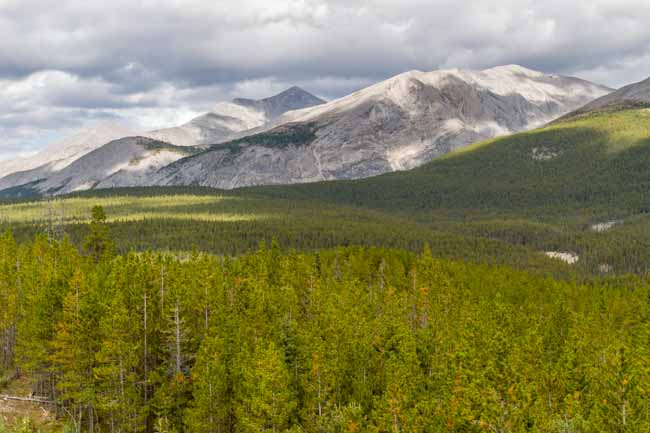 Canadian Rockies in Northern B.C. along the Alaska Highway

We were a bit disappointed to discover that years of improvements have smoothed the surface of the Alaska Highway (it’s entirely paved now) and straightened out corners (the length of the road has been reduced by more than a dozen miles as curve after curve has been pulled taught). 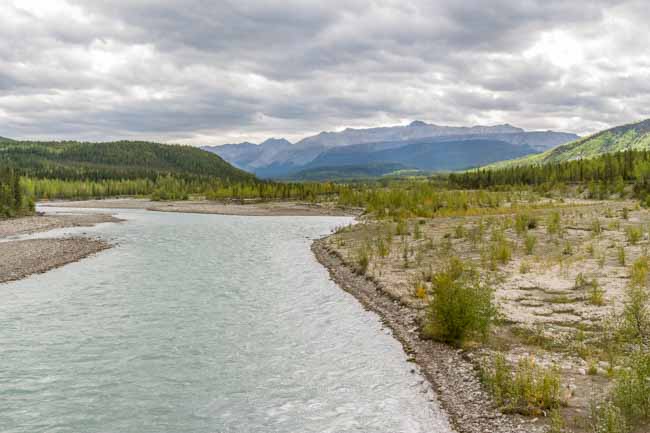 The Canadian Rockies in Northern British Columbia along the Alaska Highway.

But the scenery along the Alaska Highway remains awe-inspiring. Unlike their Colorado cousins or lower British Columbia counterparts, the Rocky Mountain chain this far north mellows out into an undulating series of moderately high, steep-sided, round-topped hills covered in pine and punctuated above the tree line by bare, flat-faced rocky peaks jutting out to remind us where the name Rockies came from in the first place. 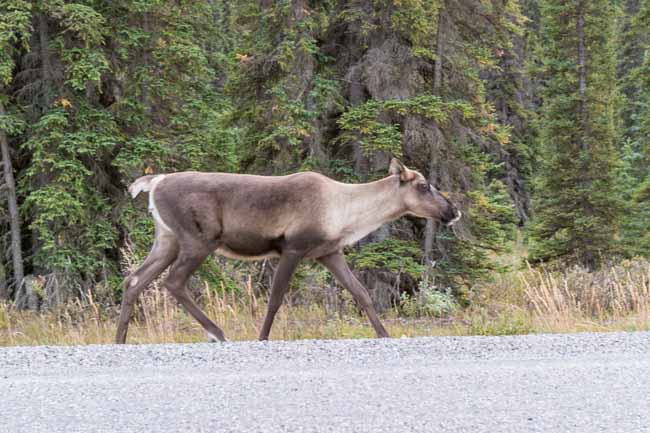 A young Caribou on the Alaska Highway.

Part of the Terminal Range, which signals the end of the Rockies chain, these mountains are home to black bears, grizzly bear, elk, wolf, coyote, caribou, and more. Less than two hours north of Fort Nelson we saw a young caribou, an animal we never encountered in Banff National Park or Jasper National Park even after driving hundreds of miles of back roads looking for the damn things and despite countless signs warning drivers to be on the lookout for the creatures. The local specialty, stone sheep—a smaller version of the bighorn—were also on the hillsides and roadsides for easy spotting.

Stone sheep on the Alaska Highway.

Then there’s Muncho Lake Provincial Park. The word muncho means “big lake” in Tagish, the language of the first nations tribes in this area, and there certainly is one huge body of water at the center of this 217,452 acre (88,000 hectare) park. 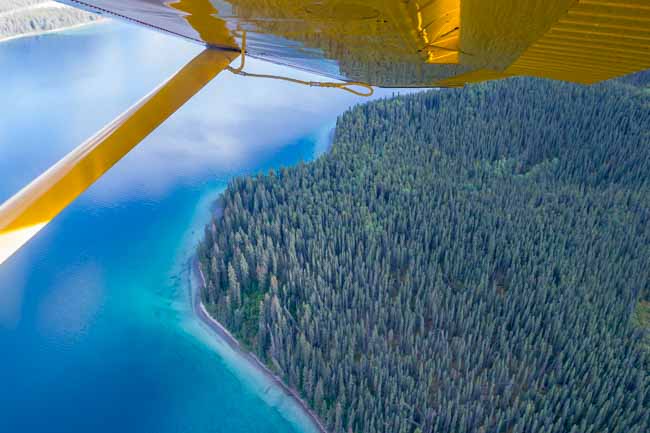 Looking down on Munch Lake.

Crystal clear Muncho Lake is about 8 miles (12  km) long, making it one of the largest natural lakes in the Rockies and one of the most formidable barriers faced by the intrepid road crews that built the Alaska Highway at breakneck speed in 1942. 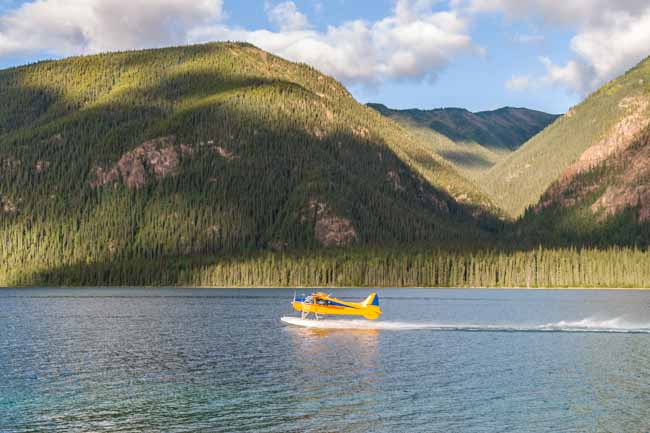 A float plane taking off on Muncho Lake.

Whether you just want to stretch your legs on a 45 minute walk to a waterfall or head out for a week-long slog deep into the backcountry, there are also a surprising number of hiking trails right off the Alaska Highway. But few are marked or even listed in that iconic Alaska Highway bible, The Milepost, which, we must admit, we found a bit tedious— there were precious few actual mileposts or kilometer posts left along the road these days, anyway, and how many entries about “turnouts with trash cans” do you really need? 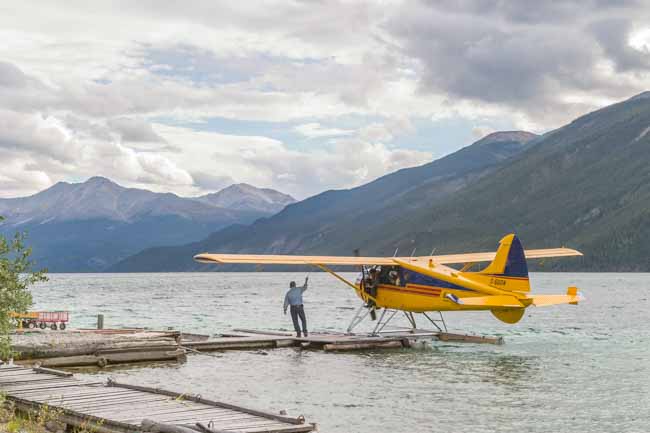 A float plane at the Northern Rockies Lodge on Muncho Lake.

For the lowdown on hiking along this stretch of the Alaska Highway, pick up a copy of the Hiking & Motorized Trial Guide from Mild to Wild from the tourist info office in Fort Nelson. Published by The Northern Rockies/Fort Nelson Tourism office, the no-frills booklet contains much more detail than many commercial guides (right down to which side of one particularly rickety bridge to keep toward if you foolishly decide to hike across it) and really innovative features such as the entire section for the 50 mile Wokkpash Trail (including a fold-out topo map) that pulls out as a piece so you only have to walk with those few pages, not the entire 85 page soft cover guide. 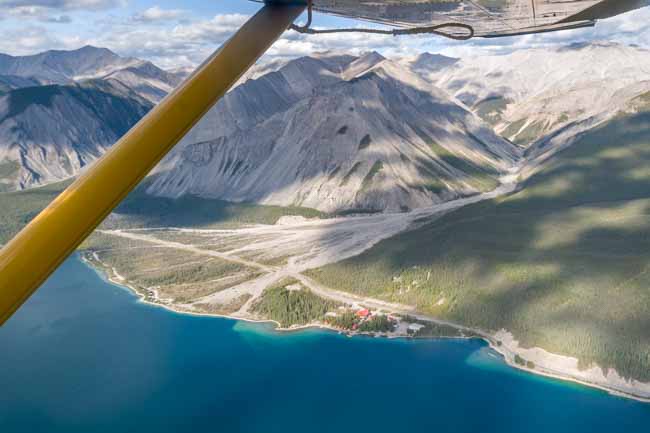 Looking down on the Northern Rockies Lodge, Muncho Lake, and the Alaska Highway.

If you don’t manage to pick up Hiking & Motorized Trial Guide from Mild to Wild in Fort Nelson before heading up the highway, don’t worry. You’ll get a second chance to get a copy of it (like we did) at the Northern Rockies Lodge. 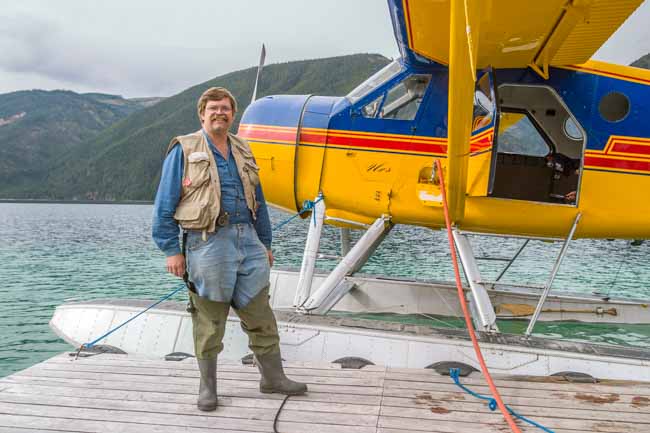 Urs, pilot and owner of the Northern Rockies Lodge, in front of his de Havilland Beaver.

Located pretty much exactly halfway between Dawson Creek (where the Alaska Highway begins/ends) and Whitehorse (where it ends/begins), the Northern Rockies Lodge is the perfect break-journey and offers plenty of reasons to linger longer. The food is good, though pricey since everything has to be trucked in—from asparagus to ice cream—essentially doubling the cost of all ingredients. And rooms in the lodge and cabins on the lakeshore are immaculate, comfortable and charming. 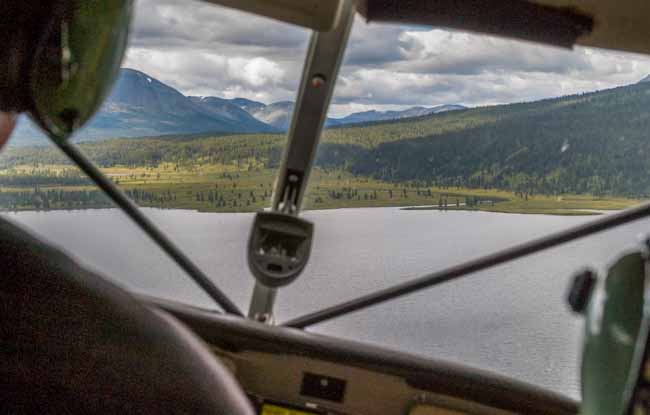 Coming in for a landing on a remote lake.

Bush pilot and Northern Rockies Lodge owner Urs Schildknech logged his first flight hours flying for gas companies in Libya where he saved up enough money to buy an old motel and the property that’s now home to the lodge. That was more than 25 years ago and a ton of expansion and improving has gone on since then.

One of the greatest additions is an incredible 14 foot (4 meter) by 20 foot (6 meter) carved wood map of the region from Nahanni National Park Reserve in the north to half-way down into British Columbia, complete with 3-D replicas of the main lodge and their three out-cabins. This piece of art was done by a Swiss character named Pauli who spent more than 1,000 hours on it. 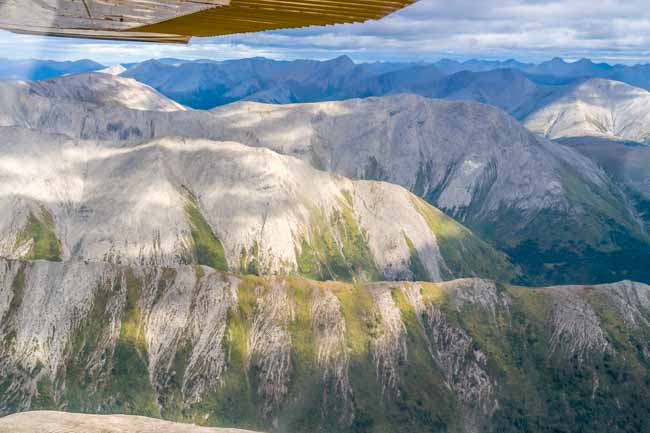 The northern British Columbia Rockies from the air.

Urs says he toyed with the idea of decorating the lodge with the traditional dead stuffed things but opted for the map instead so people could get a keener sense of where they were. He uses it nightly, brandishing a lighted pointer to gleefully show guests where they ventured during the day’s excursions and where the next day’s trips will take them. 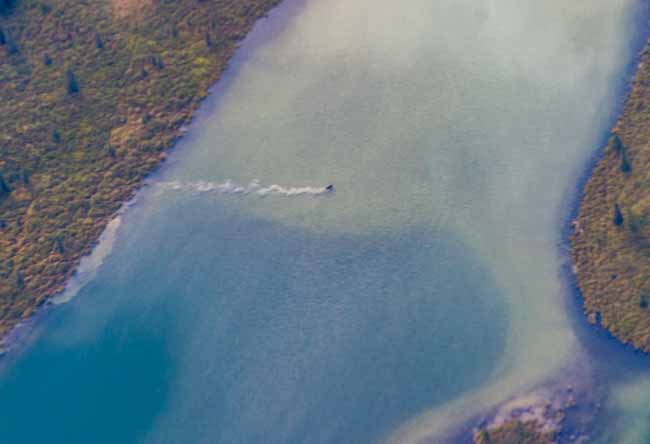 That speck is a moose crossing a lake far below our float plane.

For all these reasons, and more, the Northern Rockies Lodge is a great option for the night and a relief after passing a string of hopelessly run-down establishments along the highway offering uninspired RV pull-throughs, dusty campgrounds, and ramshackle motels. 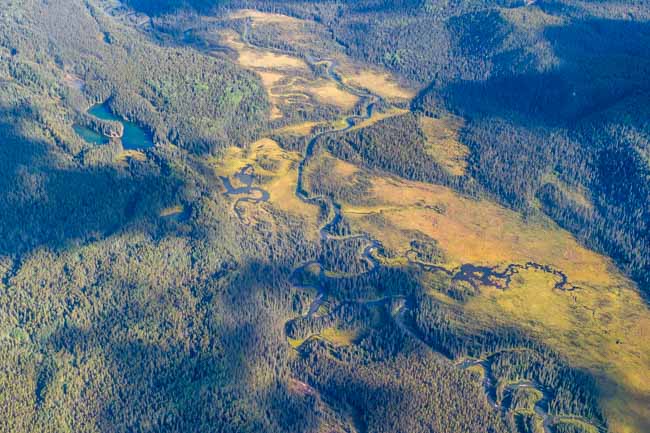 Meandering rivers and lakes in the Northern Rockies

Unfortunately, we didn’t have time to take advantage of any of the lodge’s many adventure packages such as a week or half week of daily fly-in fishing trips or an eight-day flightseeing tour that covers all the highlights between Edmonton in Alberta all the way up to Inuvik in the Arctic. We did get up in the float plane for some flightseeing with Urs. 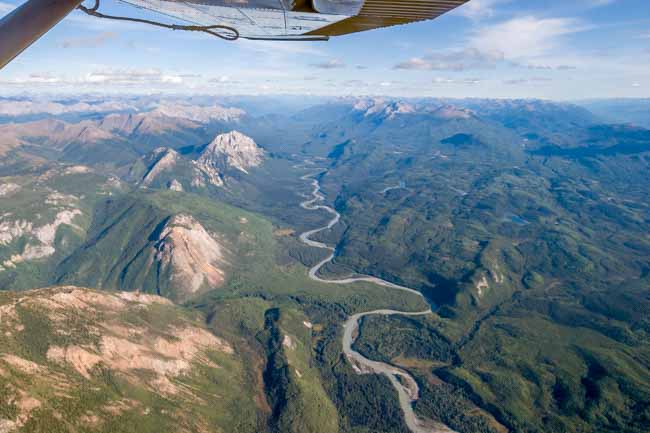 Flying over the northern Rocky Mountain Trench, a 1,000 mile (1,600 km) valley that separates the Rocky Mountains from the Columbia and Cassiar mountains.

The Cassiar Mountains from the air.

Northern Rockies Lodge also holds the lease on three backcountry plots within Muncho Lake Provincial Park itself and has built a roomy fly-in cabin on each plot, one at Frog River, one at South Gatga (perhaps best for wildlife watching since there’s a nearby mineral lick which the moose and other animals love), and one at Netson Lake. The cabins are rustic (wood stoves, propane cooking stoves, outhouses), but come stocked with firewood, groceries, a canoe, and a satellite phone plus tranquility to spare. 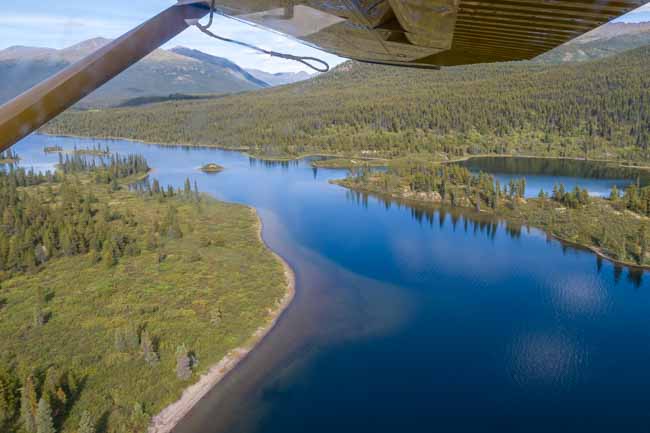 Our destination: a lake with great trout fishing about 120 miles (190 km) from Muncho Lake in the wild middle of the northern Canadian Rockies. 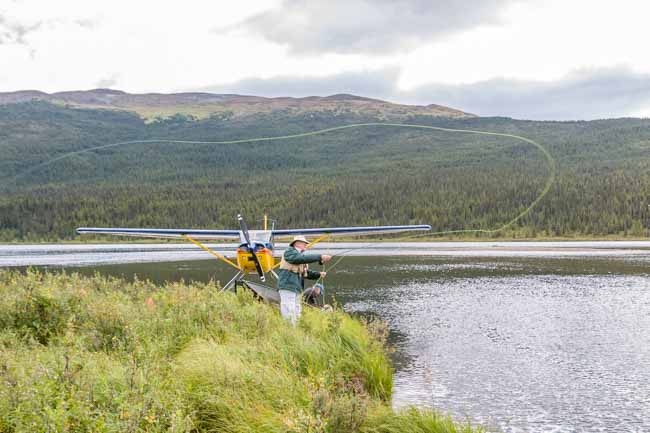 Warming up the old fly cast.

The Frog River cabin is uniquely situated between two bodies of water, one of which eventually dumps into the Pacific, while the other empties into the Arctic. This unusual watershed brings with it an equally unusual array of fish, including Arctic Grayling and Bull Trout. A trail near this cabin will even take you to Continental Divide itself. 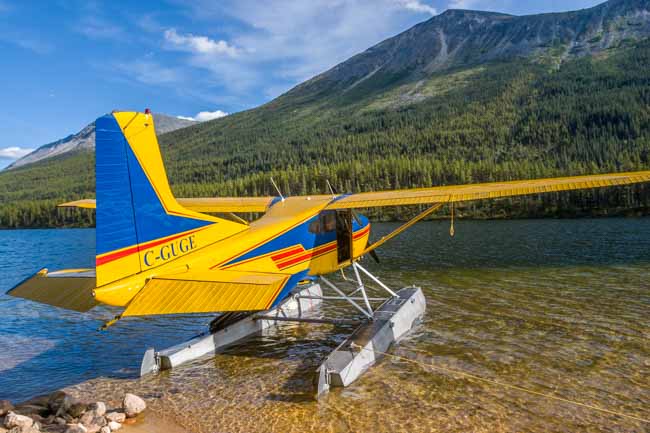 After a day of fishing, we made a quick stop at Frog River where the Northern Rockies Lodge has a remote fly-in cabin. This lake is the watershed between the Pacific and the Arctic oceans. 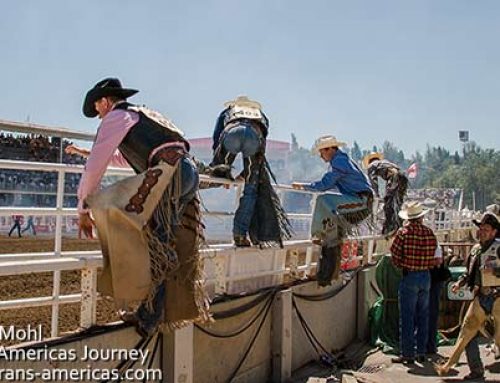 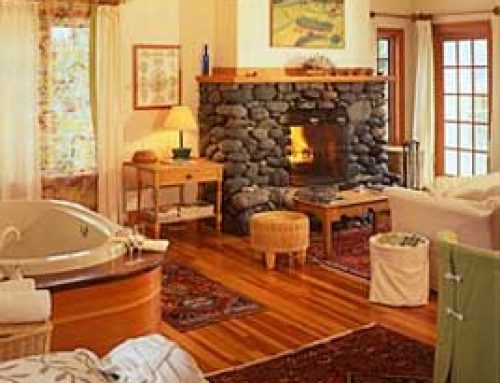 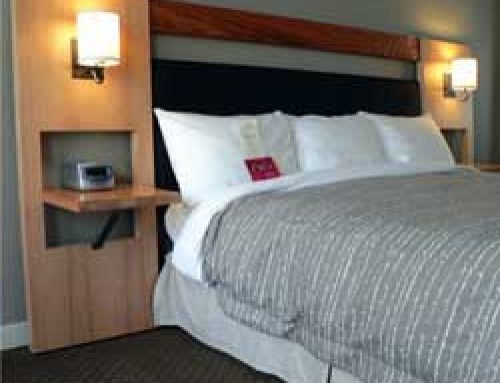 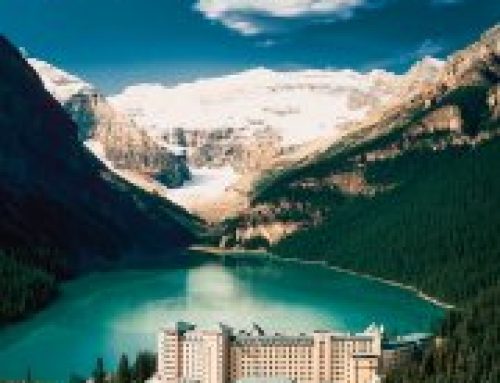 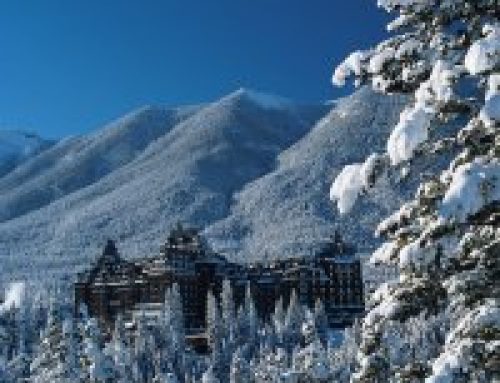 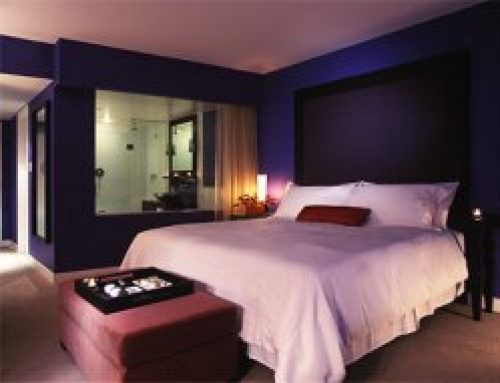 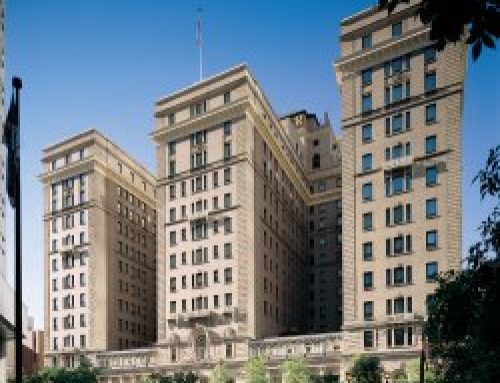 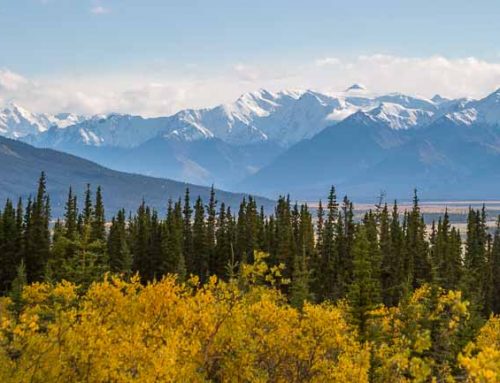 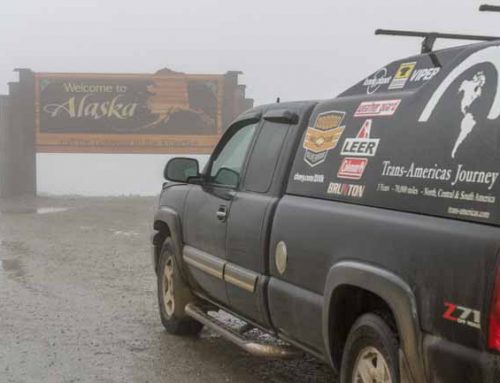 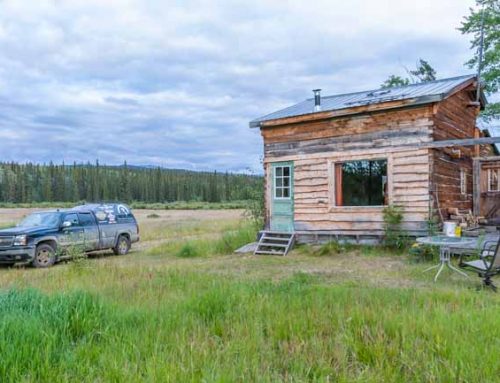 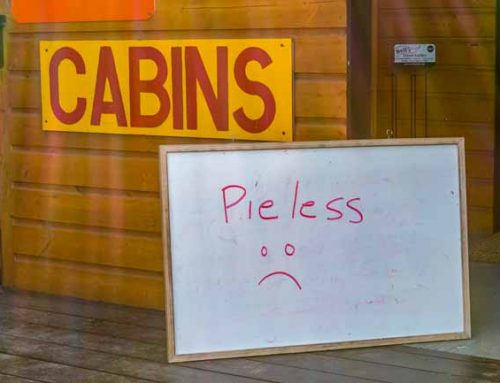 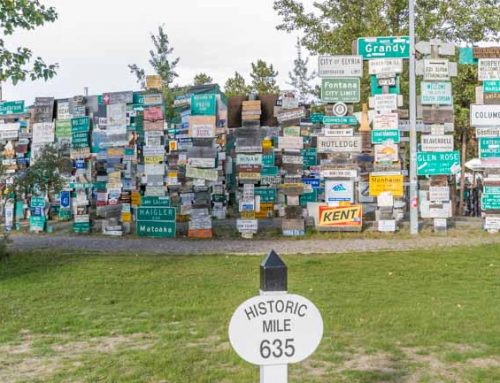 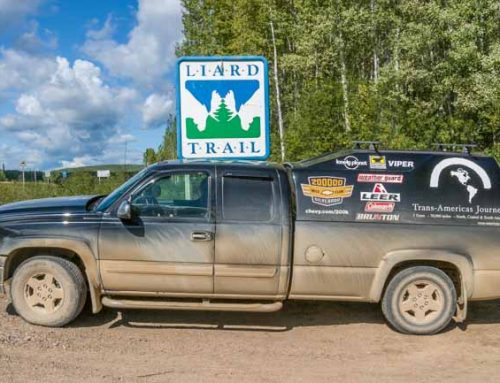 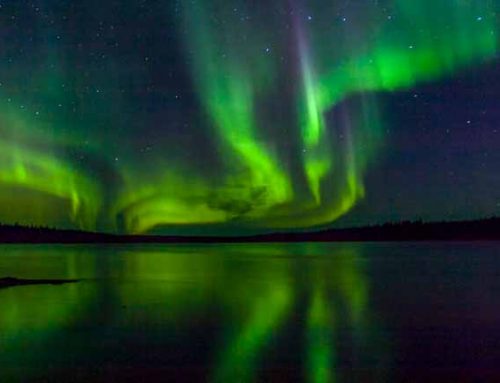