Welcome to part 1 in our three part Best Of 2010 series of posts. Part 1 is all about the Top Travel Adventures we had in 2010 including camping with critters in Mexico, an epic festival in Guatemala, and SCUBA diving with dolphins in Belize. Part 2 covers the Best Food & Beverages of 2010 and part 3 covers the Best Hotels of the year.

Yes, yes, end of year round-ups can be lame. Or they can be a valuable chance for us to look back on the year that was and remember just how damn lucky we are. Done right, an end of year round-up can also be a valuable chance for you to get a quick hit of the best of the best tools, tricks, triumphs and truths that made our Trans-Americas Journey in 2010 and, we hope, inspire you to hit the road yourself in 2011 (or 2012, no pressure). But first, a few relevant stats.

We also spent a lot of time outside of our truck doing and seeing exciting and awesome things. In no particular order, here are… 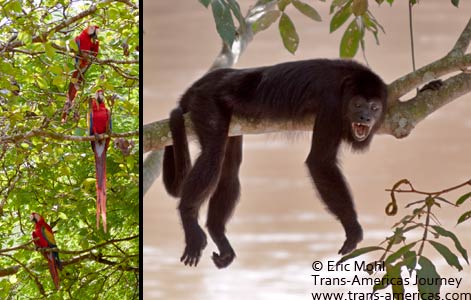 Our camping buddies in Mexico.

Best campsite: The small camping area at Las Guacamayas Ecotourism Center in the Montes Azul Reserve in Chiapas, Mexico would have been fairly perfect even without the feathered and furry neighbors: grassy, flat, shaded and right near super clean showers and toilets. But the place got even better in the morning when a flock of scarlet macaws (guacamayas in Spanish) flew in for breakfast and started feasting in a tree literally right next to our tent. While other visitors were out tramping through the sticky jungle trying to spot macaws we spent the entire day in our camp chairs sipping coffee (then cold beers) and watching the vibrant birds stuff themselves silly. In the late afternoon, a small family of howler monkeys showed up as well and decided to spend the night in a neighboring tree. The following morning their gnarly roars (which gives them their name) served as our wake up call.

Best random encounter with friends from home: We were minding our own business, enjoying a cup of coffee and setting up our computers for a morning of work at La Zebra on the beach in Tulum, Mexico. That’s when we saw them–two familiar figures cutting through the collection of bungalows to reach the beach. Could it really be our friends Joe and Pooja from New York City randomly walking through our little bungalow hotel? Incredibly, it was true and we spent the next few days thoroughly enjoying “The Zeeb” and the cherished company of our friends. 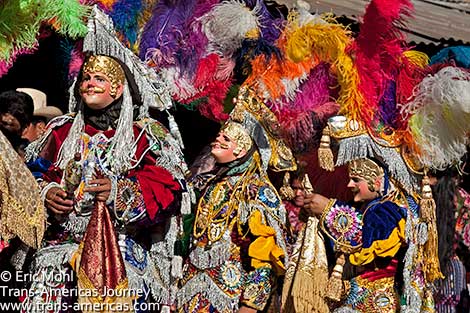 A moment from the Festival of Santo Tomas in Chichicastenango, Guatemala.

Best festival: The key elements of a classic Latin American festival are all in effect in abundance during the annual Festival of Santo Tomas in Chichicatenango, Guatemala. You’ve got your costumed dancers, you’ve got your saints paraded around town on the shoulders of mere mortals, you’ve got your voladores who spiral down to the ground from the top of a very tall pole via ropes tied around their ankles, you’ve got your indigenous population wearing their finest (and impossibly colorful) traditional clothes, you’ve got your fall-down drunk men littering the central plaza, you’ve got your ear-splitting fireworks and bombas.

Best get-out-there-and-do-it clothing: We also can’t do without our point6 wool socks which we wear every day in every way (city walking, hardcore hiking, padding around a chilly room). Early front runners for 2011? Our brand new ExOfficio Insect Shield pants, shirts and socks and multi-pocketed ScottEvest jackets and pants. Stay tuned… 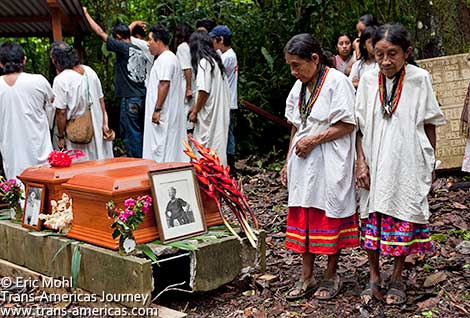 The reburial of Frans Blom and Trudy Duby in a remote Lacandon village in Mexico.

Best adventure we never could have had without our truck: We were very lucky to be invited to take part in the re-burial of Frans Blom and Trudy Duby, the founders of Na Bolom, a non-profit organization based in San Cristobal de las Casas in Chiapas, Mexico, which works to preserve the culture and customs of local indigenous groups while improving the basics like health care and education. There was only one thing: the beloved pair’s remains were going to be re-buried in a cemetery near the remote village of Na Ha, one of the few remaining Lacandon villages in the world. This is definitely 4X4 territory plus we’d need to bring our own camping gear and help transport other supplies for the group. Because we had the right wheels we were able to be there as Frans and Trudy took their rightful place next to a former Lacandon leader so, as the Lacandon villagers said, the three of them could continue the good conversations they used to have when they were all still alive. 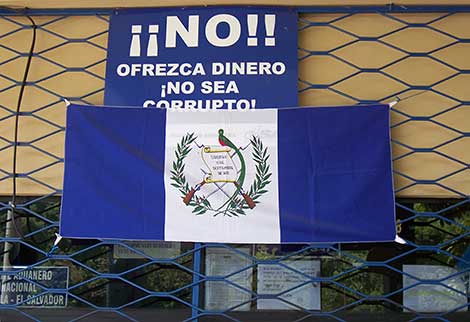 Getting into Guatemala turned out to be a breeze.

Best border crossing: We were warned that crossing the border into Guatemala in your own vehicle can be a frustrating and time consuming experience. And that’s if everything goes smoothly. With loins girded, we left Tapachula, Mexico and headed for the border post at Talisman, Guatemala where, to our shock, we were neither frustrated nor delayed. The whole border crossing process was pleasant, bribe-free, and took less than one hour. Honestly, the biggest nuisance about crossing into Guatemala were the “helpers” hanging around offering to get you through the system for a “tip”. Hey, here’s a tip: crossing into Guatemala is no more complicated or harrowing than getting across any other border. Keep your documents and your smile in good working order and you’ll be fine.

Best parade: The gay pride parade in the colonial city of Merida in Yucatan State, Mexico was a colorful, flamboyant surprise and we loved that the costumed participants (some apparently marching with straight but supportive friends and family members by their sides) pranced right past the main Catholic cathedral in the center of town.

Best salt water SCUBA dive: So we never actually encountered the whale sharks we’d specifically come to Gladden Spit to see, but we did spend nearly an hour diving with a small group of bottlenose dolphins when we went diving with Hamanasi Adventure and Dive Resort in Hopkins off the southern coast of Belize.

Best fresh water SCUBA diving: Fill a massive lake at an altitude of 3,200 feet (975 meters) with warm gin-clear spring water, add SCUBA divers, and you’ve got Laguna Media Luna in San Luis Potosi State, Mexico. With crystal clear visibility, relatively shallow depths, and bath water temperatures this is as relaxing as SCUBA diving gets–and one of the most comfortable places to learn to dive, by the way (Centro de Buceo Media Luna offers guided dives and certification courses in the lake). 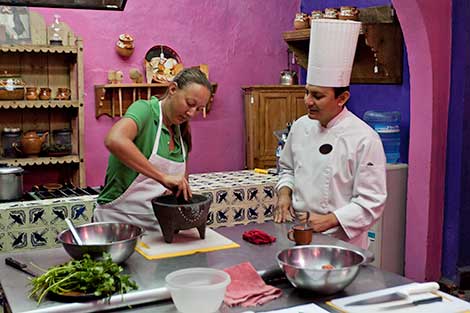 Karen working the molcajete during a cooking class in Puebla, Mexico.

Best learning experience: As followers of our Journey know, we love Mexican food so we immediately said yes when Leobardo Espinosa, the gregarious and generous owner of Mesones Sacristia in Puebla, offered us a morning of cooking lessons with his executive chef. The menu was precise, simple, and delicious (like most Mexican food) and consisted of chalupas (which bear NO resemblance to the Taco Bell abominations of the same name) with two different fresh salsas followed by mole over chicken. We gained a new-found respect for the blender and discovered that one of the most important ingredients in a traditional mole is also the oddest: a completely scorched corn tortilla.

Best waterfall: The Huasteca region of Mexico is a watery wonderland with waterfalls galore. We visited many of  them in 2010 but the standout, by far, was Cascada Tamul. It took us two tries to even find the thing, which is shocking since it’s more than 300 feet (91 meters) high. But finding the right road to access the waterfall was just the first step. Next we haggled over the price with local guide then helped him paddle and pull our canoe upstream for more than an hour before we finally laid eyes on the impressive wall of water.

Best uncaged animal encounter: It hardly seems possible, but during our recent happy diversion to Antarctica and back we saw (first hand and at very close range) that penguins really are more adorable than you think. Also, killer whales have gotten a bum rap.

Best animal art encounter: One day they just appeared all over the streets of San Cristobal de las Casas in Chiapas, Mexico. Twenty three life-size molds of jaguars each decorated by a different artist following a different theme. Dubbed “Jaguarte”  the pieces spent a couple of weeks in San Cristobal, then moved on to adorn other southern Mexican towns.

Best daytime sky event: This big bold double rainbow literally appeared out of the clear blue sky while we were driving near Merida in Yucatan State, Mexico. It was so strong and appeared to be so close that we felt like we might actually drive right through it.

Best nighttime sky event: The light-pollution-free skies above the small town of Chichicastenango, Guatemala were the perfect backdrop for December’s total eclipse of the moon. And, yes, now we’ve got that Bonnie Tyler song in our heads too…

Best concrete architectural attraction: In the jungly hills outside the tiny town of Xilitla in San Luis Potosi State, Mexico lies Las Pozas (the pools), a concrete fantasyland created by English eccentric Edward James between 1949 and 1984. The place is as crazy as it is creative with enormous concrete sculptures inspired by the delicate natural surroundings, steep stairways to nowhere and a generally pleasing amount of crumble and decay. There is, we venture, nowhere else like it on earth. 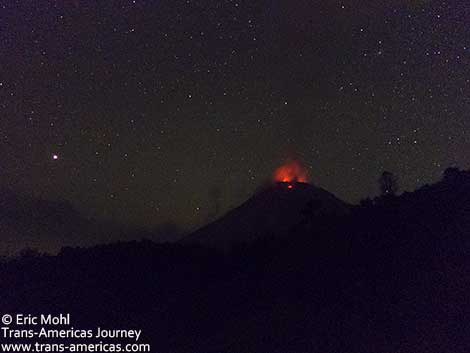 Sleeping with an active volcano in Guatemala.

Best slumber party with a volcano: Guatemala is lousy with volcanoes including some of the biggest and most active in the world, like Santiaguito. Actually, an offshoot of neighboring Santa Maria volcano, Santiaguito is extremely active spewing out steam, ash, hot rocks, and lava on a daily basis. Santiaguito put on a particularly lively show on April 26, 2010 with an ash plume more than four miles high which has sparked some volcanists to keep an even closer watch on the volcano. We wanted to keep a close watch on it too so we joined a Quetzaltrekker trip and hiked up to a viewpoint disturbingly close to the very active Santiaguito volcano where we camped with a view of the volcano’s dramatic shenanigans. Ash rained down on us, steam shot up into the air, more than once the volcano chucked out huge red-hot boulders and after night fell we could see glowing red magma.